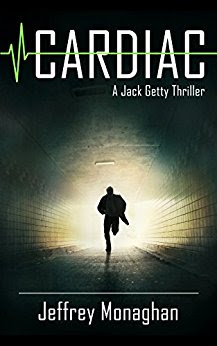 What if the one thing meant to keep you alive was used to kill you?

Embattled CEO Jack Getty is nervous. This is his final chance to save his company. He is announcing his firm's breakthrough discovery at the world’s largest annual biotech conference. A discovery that trials show will extend human life by 75%. But as Jack approaches the podium, he suffers a major heart attack and collapses onto the stage, stunning the conference attendees.

Jack is rushed to the emergency room where surgeons implant the latest Wi-Fi enabled pacemaker, saving his life in the process. What Jack doesn’t know, however, is that an underground hacking group has its sights set on manipulating his “secure” pacemaker to get information only he can provide. Despite the hackers unrelenting terror, Jack refuses to give them what they want and soon starts to uncover the true motives of this mysterious and powerful group.

Fast-paced and complex, this thriller twists and turns as it stays one step ahead of the reader. Readers will find it a heart-pounding novel that dances on the fringe of the dangers lurking within today's modern technologies.

Well, this one is going to make people look twice at the marvels of medicine! Imagine receiving a lifesaving medical device that could turn on you at the press of a key should someone decide you are in the way of their agenda?

Jack, a hard-driving, successful CEO is about to turn the world on its heels with a breakthrough biotech discovery. He is also facing a hostile takeover of his company. That was the perfect combination for a heart attack that nearly killed him. It was the latest WiFi enabled pacemaker that saved his life. It will be a group of hackers who will manipulate his pacemaker to use Jack as a puppet for their own nefarious needs. Is this a corporate act of sabotage or could it be something more sinister and twisted?

Technology could kill Jack at the push of a key and technology could save Jack when he needs it most. In a game of cat and mouse, time is of the essence and the clock is ticking…can Jack turn the tables on evil and save his own life, his company and his family?

Hold on tight to the edge of your seat, CARDIAC by Jeffrey Monaghan is part science fiction and part too realistic to ignore! No muscled warriors will jump to the aid of this corporate leader with a heart. One manipulative and twisted villain is pulling the strings and he is not about to let Jack live.

Gripping, imaginative and full of intrigue, Jeffrey Monaghan has a hit for those who like medical thrillers and to think “what-if?” Medical and technical inventions, meant for good become twisted at the hands of evil. Could this happen in reality? Grab a comfortable chair, you won’t want to stop reading until the very last page.

I received this copy from Jeffrey Monaghan in exchange for my honest review.