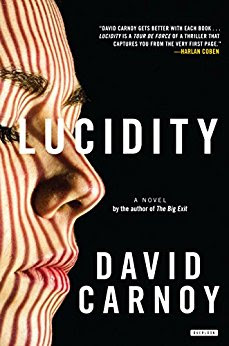 Lucidity: A Thriller
by David Carnoy

Twenty years after the unsolved case of Stacey Walker’s disappearance went cold, a Silicone Valley executive hires the retired Menlo Park Police Detective Hank Madden to find her body and track down her missing husband, the prime suspect in her unsolved murder. Four months later, author Candace Epstein is pushed in front of a car near Central Park. Her editor Max Fremmer becomes entangled into the investigation of her attempted murder, though he is adamant that he is uninvolved. As he digs into Candace’s background to clear his own name, Fremmer grows suspicious of his client’s connection to a nefarious institute for lucid dreaming on the Upper East Side and its staff whose stories never seem to add up—all while an unexpected link emerges to Detective Madden’s investigation in California.

As similarities arise between the cases on each coast, Detective Madden and Fremmer forge an unlikely partnership to expose what misconduct lurks beneath the façade of the Lucidity Center—but can they unravel the secret that links their investigations together in time, or are they only dreaming? Carnoy’s Lucidity stuns with complex detail that will keep readers guessing until the final, satisfying jolt.

Reality versus lucid dreams? Can one control the other? Enter the world created by David Carnoy in LUCIDITY and become entangled in a world of missing persons, cold cases, attempted murders and a questionable center designed around the study of and lucid dreams.
California: Retired Detective Hank Madden has been hired to close out missing persons file from two decades earlier.

New York: a well-known author is pushed into the path of an oncoming car. Her editor, Max Fremmer, a quirky kind of guy may be a suspect and digs into her background and finds a connection to a shady lucid dreaming clinic. How was Candace involved?

When a connection is made between Madden’s case in California and Max’s own investigations in New York, this unlikely duo teams up to expose the clinic and discover what is going on. Will they get to the bottom of a twenty year old case and discover who wants Candace dead?

Twisted like a road climbing a mountain, filled with surprises and intrigue, this suspenseful tale is one of those tales where an armchair detective will be hard-pressed to guess the big reveals at the end. A little gritty, a little humorous and filled with unique ideas, a great read for mystery fans and amateur sleuths, alike.

I received an ARC edition from David Carnoy in exchange for my honest review.