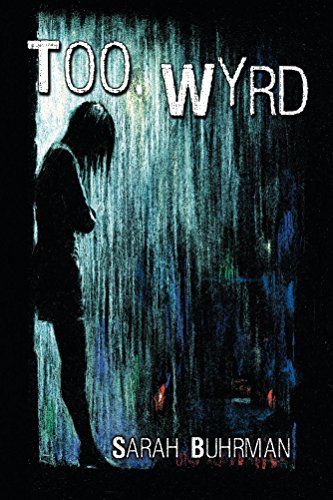 Too Wyrd
by Sarah Buhrman

Nicola was never a hero. She was an everyday single mother, Heathen witch, and herbalist. And she was happy with her quiet life until the night Joseph showed up at her door with news that her step-sister joined a cult… and disappeared.

Pressured by family loyalties, Nicola goes back to Indianapolis, dodging old enemies and calling on old friends to help her. What she finds instead are an ex with super-powers, monsters and demigods on the streets, and a detective ready to bring her in for a murder investigation or three.

Can Nicola become the hero she needs to be, or will she lose everyone she cares for?

Give me a heroine with attitude, an excellent reason for wanting to keep the world safe, a bit of an unlucky streak, attitude, great friends and allies, and attitude. Thank you Sarah Buhrman for introducing me to Nicola! With a title like TOO WYRD I KNEW I was in for something special in the urban fantasy genre. Guess What? I got it in spades!

Nicola is your average Heathen witch. She is also a single mother who will do anything to protect her child, so I guess that alone makes her a hero in my book! Then she gets the news, her step-sister has joined a cult and disappeared and now the family thinks it is up to her to find the wayward Murielle and bring her home or at least to her senses. All Nicola has to do is drop everything, head to another city, while avoiding her past mistakes and a few enemies she may have made. Not so easy when she discovers the cult her step-sister has joined is led by the father of Nicola’s child, the same jerk who walked out when she told him she was pregnant.

Turns out the ex also has “super powers,” that he shouldn’t and they are part of the gifts of ancient runes. Oh, yes, and a few demigods, monsters and a detective who thinks that just because she keep showing up where dead bodies are piling up, she must be guilty of something. Along with her best friends and a couple of amazing Valkyries, this unlikely team of detectives are on the hunt for the runes so an evil god will not use them to create havoc in the human world. Hang on tight, because just when you think Nicola is going down, she bounces back up and keeps on going! Face it, if she doesn’t she could lose everything and everyone she cares about. Now that is incentive and Nicola is the perfect secret weapon, attitude and all, because that witch also has a heart, well-timed humor and is a fresh face on the urban fantasy scene!