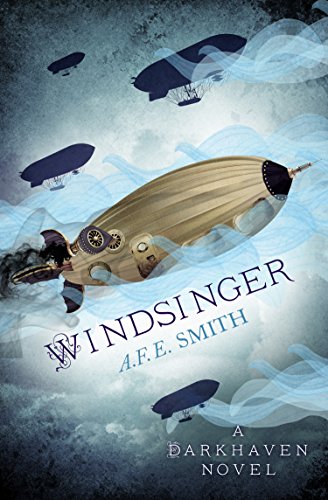 The third instalment in the Darkhaven series.
Ayla Nightshade prepares to meet with the Kardise ambassador to sign a treaty between Mirrorvale and Sol Kardis. However, negotiations are halted as the ambassador is discovered dead in his chambers, poisoned by the same bottle of taransey he and Ayla had shared the night before.
Ayla has been framed for murder and the peace between two kingdoms is at stake. Tomas Caraway and his Helmsmen must rush to prove her innocence before war destroys all they have fought for.
Along the way they discover the plans for a Parovian airship, the Windsinger, which reveal a chamber designed for a special cargo: a living one.
Together Ayla and Tomas set out to uncover their real enemies – a search that will lead them closer to home than they ever anticipated.

In a land where wars can start for power, greed, or no reason at all, Ayla has the opportunity to engage in treaty talks with the representative of Sol Kardis. In an effort to convey trust and personal caring, Ayla, offers a private chat with the Kardise ambassador, serving the precious and rare taransey. Imagine how it looked when the next morning, the ambassador was found dead in his chambers. Ayla had the means, and fast becomes the prime suspect by the Karise contingent. When the investigation proves that the taransey was poisoned, what originally makes no sense, now has become an urgent hunt to find who and how the poisoned was added. With war now on the horizon, Caraway must muster his finest to discover proof that Ayla is innocent.

If Ayla is innocent and the Kardise contingent is innocent and no outsider was seen lurking about the castle, could a third party be stirring the pot to take advantage of the coming battle? A Parovian airship is on the way. The Windsinger has its sights on kidnapping the heart of Mirrorvale, making them more than just a buffer between Sol Kardis and Parovia. Treachery is coming from the skies and Ayla must defend her people, and all of the innocents that will be lost. The creature the feared will now become their savior, but at what cost?

As the chaos continues in A.F. E. Smith’s Darkhaven series, WINDSINGER may be the most chaotic and treacherous of all. Fierce battles, a woman reluctant to change her form must use her powers to their fullest to take lives in order to save her people and those she loves. The price must be paid for love, loss, deceit and treachery and for some, the price may be too high.

I received an ARC edition from A.F. E. Smith and Harper Voyager in exchange for my honest review.