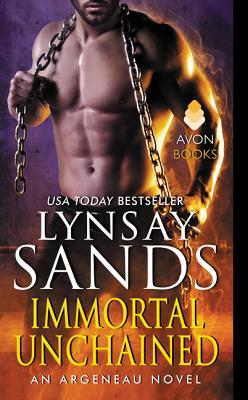 Ever since Domitian Argenis recognized Sarita as his life mate, he’s been waiting for the perfect moment to claim her. Those fantasies did not include him being chained to a table in a secret lab or both of them being held hostage by a mad scientist. Somehow, they have to escape…

Sarita has seen some crazy things as a cop, but nothing to rival Domitian. A vampire? Seriously? But his healing ability, incredible powers, and their mind-blowing physical connection—none of it should be possible, yet her body knows differently. Now, not only do they have to save each other, but other innocent lives are at stake. Failure is not an option, for Sarita intends that Domitian show her exactly what an eternity of pleasure feels like…

Sands is back with the 25th installment of the Argeneau series and it's still going strong with Immortal Unchained.

Domitian is an ancient vampire that found his life mate when she was still a young human. Instead of claiming her, he decided to give her some time to grow up and live. But did he wait too long? You might think that, when he finds himself chained and in the hands of the mad scientist they’ve (the Argeneaus) been battling for years. To top it off, Sarita is pulled into the labs by nefarious means and is at risk as well.

I do have to say, Sarita is a much bigger person than I, faced with Domitian’s world…and the lab. Being a cop might help her cope with the strange but seriously how much can one person be expected to accept.

Stuck on an isolated island off Venezuela, Sarita and Domitian soon discover the experiments have gone much deeper than anyone had imagined.

Putting the fiery, Sarita and Domitian together was pure genius on Sands part. It's like the perfect sweet, Domitian, and spicy, Sarita sauce.

If you are a paranormal romance fan then Immortal Unchained shouldn’t be missed. You can't help but connect with the action, steaming hot romance, a dash of darkness... It is entertainment reading at its best.

I received this ARC copy of Immortal Unchained from Avon in exchange for a honest review. This book is set for publication March 28, 2017.