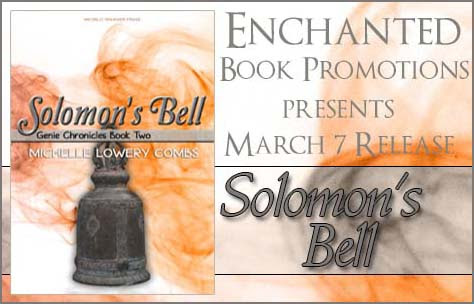 Title: Solomon’s Bell
Author: Michelle Lowery Combs
Genre: YA Fantasy
To save her family, Ginn uses her newfound genie powers to transport herself and her friends to 16th century Prague. Only one thing there remains the same as at home: she can’t let anyone know what she really is.
The Emperor of Prague and those closest to him are obsessed with magic. In pursuit of it, they’ve waged war on the citizens of their city. In the citizens’ defense, someone has brought to life a golem, a dangerous being with connections to an artifact capable of summoning and commanding an entire army of genies. Can Ginn escape the notice of the Emperor as she attempts to discover a way to defeat Prague’s golem in time to save her family from a similar creature?
Solomon’s Bell is the sequel to Heir to the Lamp and the second book of the Genie Chronicles series.

Michelle is an award-winning writer and blogger who studied business and English at Jacksonville State University. She lives in Alabama with her husband and their army of children. When not in the presence of throngs of toddlers, tweens, and teens, Michelle can be found among the rows of her family’s farm, neglecting her roots and dreaming up the next best seller. She is a member of the Alabama Writers’ Conclave and the Society of Children’s Book Writers & Illustrators (SCBWI).