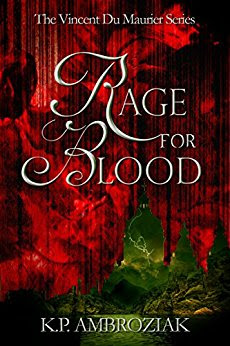 Rage for Blood
by K.P. Ambroziak

In the days of the bloodless, a healthy human is a vampire's most valuable resource. But they are in short supply and Vincent Du Maurier is hungry. Evelina could be the last human being alive--and she's pregnant--which makes her situation most inconvenient for Vincent. As he struggles to keep her and her unborn child from both the growing population of bloodless and his own kin, he faces the most difficult choice of his long life -- whether to give in to his hunger and risk a destiny more bleak than Hades, or deny his nature and become something far worse than dead ... a compassionate vampire.

…and then there was the plague, turning humans into bloodless zombies and spelling the end of humanity as well as the end of the precious blood a vampire craves. Desperate to satiate his hunger, vampire Vincent Du Maurier finds a young and healthy woman, Evelina, a rare find indeed, to make her even more of a precious find, she is pregnant and Vincent’s world becomes a maze of choices.

Should he keep her to himself as a final delicate morsel and vessel of the sweetest of bloods? Or has a long dead emotion come to the surface, compassion and the desire to keep both Evelina and her unborn child safe from the infected, as well as his own kind? What manner of vampire has he become to feel protective of what should be his final meal?

Is RAGE FOR BLOOD by K.P. Ambroziak unique in the world of the paranormal, post-apocalyptic, dark horror and suspense or is it a tale that takes readers down a dark path of desperation and hopelessness unlike other tomes before it? Told via the diary of a powerful vampire, it is a tale of change, of revelation that if Vincent is to save his own kind, he must find a way to save humanity as well, but is saving one woman with child the answer or has he grown a conscience in a time of total hopelessness?

Follow Vincent’s story, as he strives to keep Evelina alive and safe. Watch the relationship that grows between these two and the lengths to which one vampire will go to keep a human safe for more than his next meal as he becomes the ultimate anti-hero in a world on the verge of extinction.

K.P. Ambroziak’s tale is dark, desperate and gritty. Her stark descriptions and shadowed scenes feel as heavy as the situation her characters find themselves in. While Vincent may have feelings in his undead heart, his nature still shows through and his possessiveness can become brutal and deadly. I found myself wondering, can a leopard really change his spots or will his true nature always show through. Along with the blood, the gore and the zombies, a bond is formed between vampire and human, but can it last?

Intense, with rich background details and vivid scenes, if you like your vampire tales dark, your reading unique, I highly recommend meeting Vincent as created by K.P. Ambroziak!

I received this copy from K.P. Ambroziak in exchange for my honest and voluntary review.