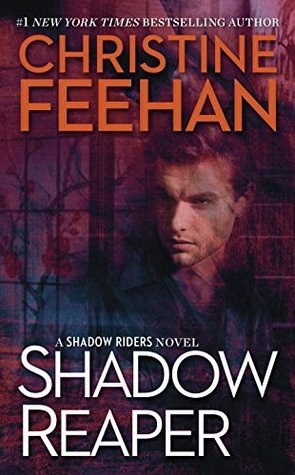 
#1 New York Times bestselling author Christine Feehan continues her sexy new series, as the Ferraros—a Chicago crime family—use their power as shadow riders to protect their empire and the ones they love…

Billionaire playboy Ricco Ferraro knows no other life. Being a shadow rider is in his blood - but so is a haunting desperation stemming from the secrets of his dark past. His recklessness puts not only his life at risk, but also the future of his entire family. To save them all, he must find a woman who can meet his every desire with a heat all her own...

Just when Ricco has given up hope, he meets her - a mysterious woman whose shadow connects with his. She's someone looking for a safe haven from the danger that has stalked her over the last several months. In Ricco's embrace, she finds one. But the darkness in which they so often find sanctuary can also consume them..

Shadow Reaper was fast, fun and full of some really steamy romantic scenes.

Ricco, playboy, racecar driver has become a serious topic of concern with siblings. Recently, he barely survived a deadly crash and they aren’t sure he did it on purpose.

Mariko’s brother was kidnapped and the only chance she has at saving him is to carry out the worst crime by a Shadow Rider, kill another Shadow Rider, Rico.

Unfortunately for the both, they are destined mates. Rico must uncover Mariko’s secrets before it’s too late. While Mariko must choose between Rico and saving her brother.

This is second book in the Shadow Rider series, and I feel like we are barely scratching the surface of this “Shadow Rider” world.

Feehan fan girl here. I've read everything that she has written and that is no lie.

To say I was pumped about a new Shadow Rider series installment would be an understatement, so with greed anticipation, I delved right back into the Shadow world with Ricco's story.

I love the family dynamic of Ferraro family and highly enjoyed the romance.

My only complaint, I did find the telling a little repetitive. I mostly found the character's emotional/internal issues caused this hangup.

Pushing that little issue aside, I can't wait for more and didn't want the book to end...with it being over 400+ pages that is saying something.

I received this ARC copy of Shadow Reaper from Berkley Publishing Group. This is my honest and voluntary review. Shadow Reaper is set for publication May 30, 2017.