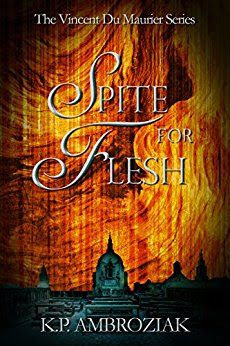 Spite for Flesh
by K.P. Ambroziak

After he discovers Byron's letters to a mysterious associate, Vincent Du Maurier is put in the precarious position of saving a dying world, one he has a hand in killing. But at the start of this third book, the days of the bloodless are past, and Vincent is living in a new age. He has a story to tell, a future to plan, and a new enemy to destroy.

He had a hand in the death of a world, the extinction of humanity and the annihilation of his own kind. Quite the dubious accomplishment for Vincent Du Maurier and not what he had set out to do. Now the rest of the story will be told as Dagur is held willing captive to a history told through Byron’s letters, including a missing volume that only Vincent can translate and detail. Finally, the new era can put a bittersweet closure to the past and prepare for an uncertain future not yet molded into reality.

Creep back quietly and listen in the shadows as this flawed being discloses even more darkness, grit and even love and admiration for those destined to breathe life into a new existence. Be horrified, impressed, saddened and even relieved to know what has happened as power begets power and even dares to liken itself to one whose pure soul was once given to save the world. Question if another, far darker Garden of Eden was created and if the forbidden fruit has been devoured once again or if this time the head of the snake has been cut off before it was too late.

To say this plot has become a twisted and tangled briar of thorns would be an understatement, but to say it is as magnetic as the polar latitudes would also be understated, as once again, K.P. Ambroziak carves out her tale with the brittle bones and ashes of the charters who have graced each volume of this trilogy. Feel the passage of time, the loss of characters from what is now history and wonder where the world veered off-course or if it stayed the course intended.

With the heavy feeling of a dark history, realize that this is a post-apocalyptic world created in an effort to preserve a race in the future. Ask yourself, through it all, was it worth it or were the secrets revealed inevitable and remember, without a past, there IS no future and heroes may not be knights in shining armor, but only instruments opting for the lessor of two evils in desperate times.

Love a world of a dark and mysterious nature? Want to ferret out the meanings behind the words presented? Prepared to be privy to the rest of the story, no matter how dark and no matter where evolution went? K.P. Ambroziak’s SPITE FOR FLESH is a spine chilling journey into a future that may or may not be…are you truly ready?

I received this copy from K.P. Ambroziak in exchange for my honest review.
Posted by Dii at 9:14 AM