The Hunted by Chrissy Lessey (The Crystal Coast Series , #2) 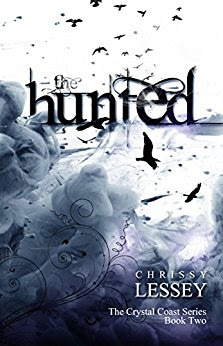 The Hunted
by Chrissy Lessey


When Stevie vanquished her family’s greatest threat, she thought they’d be safe. Unaware of the evil surrounding her, she trains with her coven and prepares to inherit her mother’s role as queen and protector of the amulet.


Chaplain Benjamin Parris, descendant of the notorious reverend behind the Salem Witch Trails, plots to resume his family’s mission and rid the world of witches. He joins forces with Susan Moore, who’s sought revenge against the coven for years, and together, they formulate a plan to destroy Stevie’s family.
​
Left weakened after the theft of their protective amulet, the coven confronts the unthinkable as a modern day witch hunt unfolds around them. And this time, Stevie might not be able to save the people she loves.

The Hunted by Chrissy Lessey (The Crystal Coast Series , #2)

No one knew the kindly Chaplain who came to town would become the coven’s most deadly adversary to date. While Stevie prepares to assume the mantle of Queen, evil has come to her small town and the witches who have lived under the radar for so long are now in danger of being outed and destroyed in a vile repeat of the horrors of the Salem Witch Trials.

Benjamin Parris has long chased after those who practice witchcraft. A descendant of the clergyman who headed the Salem Witch Trials, Benjamin’s hatred runs deep and he has stolen the coven amulet that gives them their powers. Will he use their gifts against them? Will the coven be brought to its knees?

Grief will tear through the very heart of the coven and Stevie is ill-prepared to take her place as Queen when the innocent magic of a young child awakens just when it is needed the most.
Chrissy Lessey’s THE HUNTED is a tale of loss, love and learning how the power of good versus evil can be devastating, but will bring out the best in those who are the most innocent and free of darkness. A wonderful tale that embraces the magic of the author’s storytelling and combines high tension, dark enemies and the quest to survive in a world that has become as dangerous as a riled viper in a pit. A well told tale that relies on its characters and their inherent good as opposed to gore and guts.

I received this copy from Chrissy Lessey in exchange for my honest review.