The Wrong Kind of Compatible by Kadie Scott (Love Undercover #1) 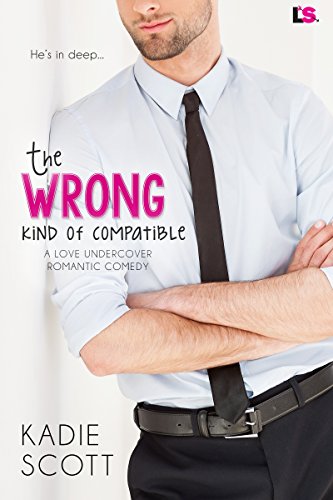 The Wrong Kind of Compatible
by Kadie Scott

Data analyst Cassie Howard may be brilliant (and, okay, a little awkward), but she’s worked hard to get where she is. She definitely doesn’t need some sexy new analyst coming in and taking credit for her work. Or the inappropriate thoughts that keep popping out of her mouth she’d rather he not hear.

For undercover FBI agent Drew Kerrigan, computers have always made more sense than people, but he’d better develop some slick social skills in a hurry if he’s going to win over the too-tantalizing-for-his-sanity Cassie. Hacking their systems was easy. Now he’s just got to hack the one person in the company most likely to see through his ruse…

The Wrong Kind of Compatible by Kadie Scott
(Love Undercover #1)

Talk about a fun read! Romance between computer geeks who are more comfortable doing coding than carrying on human interaction! Kadie Scott’s THE WRONG KIND OF COMPATIBLE is a delightful romantic comedy that takes “awkward” to a new level.

Cassie knows her stuff, stick in front of a computer and cut her loose, no problems, she has earned the position she has, one keystroke at a time. Stick her in front of a handsome new geek and watch her filters and firewalls crumble as her thoughts go from her brain and right out her mouth!

Drew is definitely a geek, definitely handsome and most definitely NOT the most socially skilled guy on the block. He also has a secret and an undercover mission, one that could end up destroying the woman he is falling hard and fast for. The big question, if what he discovers is true, will there be any way to re-boot the budding romance that is growing between himself and Cassie or will their romance face the blue screen of death?

Kadie Scott has a real sense of humor when it comes to love! Sweet, sometimes silly, sometimes sizzling, only the secrets they each hold stand in the way to love, Funny one liners, charming scenes, some nasty secrets and corporate espionage, what’s not to love? Ms. Scott may have the perfect summer read in THE WRONG KIND OF COMPATIBLE!

I received an ARC edition from Entangled : Lovestruck in exchange for my honest review.