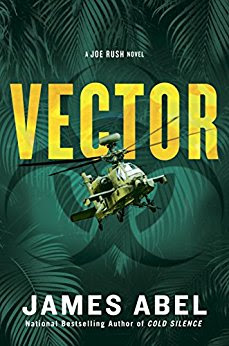 The Amazon rain forest spawns a new terror that will bring the world to its knees in this new Joe Rush bio-thriller . . .

Joe Rush is at an Amazon gold rush to study new forms of malaria when his best friend and partner, Eddie Nakamura, disappears. Learning that many of the sick miners have also vanished, Rush begins a search for Eddie that takes him into the heart of darkness--where he must battle for his life, and where he discovers a secret that may change the world . . . Thousands of miles away, floods of sick people are starting to appear in U.S. hospitals. When the White House admits that it has received terrorist threats, cities across the Northeast begin to shut down. Rush and his team must journey from one of the most remote spots on Earth to one of the busiest, as the clock ticks toward a kind of annihilation not thought possible. They have even less time than they think to solve the mystery, for the danger--as bad as it is--is about to get even worse . . .

More chilling than nuclear destruction of humanity, the Amazon rain forest is ground zero to the induced mutation of the lowly, vampire of the insect world. A brilliant mad man is on the loose, preparing to avenge his family’s deaths, a twisted version of his religion and bring the United States to its knees with the deadliest virus ever and Joe Rush finds himself caught in the vortex of an international race to prevent the deaths of millions.

It all started when Joe was in the Amazon studying new forms of malaria and his partner goes missing. What followed is a terrifying possibility that no one will be able to stop the virus that is being unleashed on an unsuspecting world. Can Joe get to the villain before it’s too late? Can he discover who is responsible for this travesty? Can a cure be found in time? Will people believe that bad things don’t just happen to other people? No one is safe, and it will take some deep searching to connect the dots to the shocking realization of what pushed one man over the edge to become the deadly pawn in a game of life and death. Have terrorists found a new way to take down America? Will American “generosity” be bastardized to save corporate bottom lines?

VECTOR by James Abel is a spine chilling tale of terrorism, engineered insects and how easily an entire nation can be brought to its knees in the blink of an eye. The world is unknowingly depending on one man to get the answers and get it right. For those who love a good sci-fi/medical thriller, settle in, and be ready to truly realize how precarious the balance of nature versus man truly is. Well written, filled with tangled twists, dark secrets and a game of cat and mouse played on the playing field of life.

I received an ARC edition from Berkley Publishing Group in exchange for my honest review.