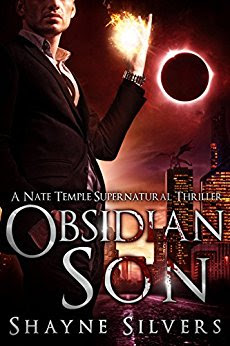 A city that doesn’t believe in magic. Bloodthirsty weredragons. Good thing this reckless playboy has superpowers…

It’s been said that monsters cry when a good man goes to war. But they should run screaming like little school girls when that man is secretly a wizard, and maybe not necessarily good…

Nate Temple’s all-consuming quest to avenge his parents is temporarily put on hold when shape-shifting dragons invade St. Louis. And perhaps cow-tipping the Minotaur for answers might not have been Nate’s smartest opening move, because now every flavor of supernatural thug from our childhood nightmares is gunning for him. Nate learns that the only way to save his city from these creatures is to murder his best friend…

Nate’s choice will throw the world and his own conscience into cataclysmic chaos: avenge his parents or become a murderer to save his city. Because to do either, he’s going to have to show the world that magic is very, very real, and that monsters are very, very hungry… To survive, he might just need to take a page from the book, How to Win Friends and Influence Monsters.

If you like Jim Butcher, Kevin Hearne, or Patrick Rothfuss, you will LOVE the first installment of The Nate Temple Supernatural Thriller series.

It would seem our hero has it all, vast wealth, super wizard powers and an attitude that, well, one could take as comical or conceited, or would arrogant be a better word? Nate Temple is a young man of power and along with his two best friends, an FBI agent/werewolf and a Normal, non-magical regular kind of guy, life is good. Nate avoided the family mega business and runs his own bookstore, purchasing special items for his clients at a hefty profit, but when he discovers his late parents may actually have been murdered, he is determined to find who and why.

OBSIDIAN SON by Shayne Silvers is one of those fantasy books readers will love or not, for various reasons. I mean who wouldn’t love a guy with the sheer audacity to go cow-tipping a Minotaur, a very old, very wise and powerful Minotaur? Then there are the were-dragons who show up with some bones to pick and they seem to belong to Nate. But wait, there’s more…seems the fate and lives of St. Louis citizens lay in the hands of our wayward wizard, too!

I have to say, the humor and snark factor runs high for this one, even though Nate could be a bit of an arse and definitely isn’t my favorite hero evah. That aside, this is a good story, filled with over-the-top action, beasts and creatures of nightmares and myth, and the ever-elusive and deadly “book.” Someone does need to bring Nate into the 21st century as his basic attitude toward women is as shallow as a creek bed in the Mojave. Again, be warned, keep the humor meter running, because in spite of Nate, (and because of) this is a fast-paced read with tons of entertainment value.