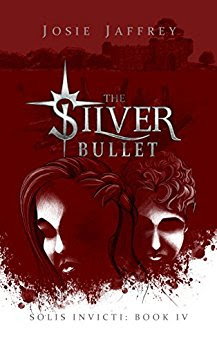 The Silver Bullet
by Josie Jaffrey

“To think of death as a thing of beauty: that’s a threshold you can’t cross twice.”

The truth is out, and Emmy is faced with a choice she dreads: surrender her mortality, or allow her frailty to threaten the nascent society the Silver are building. With exile the only reasonable alternative, she struggles with feelings she can’t define and a duty she’s reluctant to accept.

While the Silver city hangs in the balance, Emmy must remake herself to redeem it and save her friends. Her reinvention forces her to choose sides, threaten alliances and risk becoming like those she fears: inhuman.

The Silver Bullet is the final book in Josie Jaffrey's Solis Invicti paranormal romance quadrilogy, set in a dystopian, post-apocalyptic London where a deadly infection threatens to wipe out humanity. The only people who can stem its advance are the Silver, a vampiric race who offer a simple exchange: protection in return for blood and subservience.

Emmy is caught up in a fight for her life, literally. She has no desire to give up her mortality and only deception may save her as the fragile balance of peace in London is threatened and the protection of the Silver is in doubt. One powerful vampiric enemy sets his sights on a total takeover and annihilation of the reigning king and his followers and taking out Emmy would be like icing on his bloody cake.

The Weepers’ number are growing and their deadly threat is everywhere. With a vampiric war in the offing, Emmy must rely on Sol’s feelings for her to keep her alive. Can the king afford to risk his own life and the trust of his subjects to save her knowing she doesn’t’ return his feelings? What of Ollie, a human she has grown close to?

She can only hide for so long, only depend on the Silver as long as they follow Sol. Confused emotionally, determined to stay a mortal, Emmy’s heart and her connection to Sol could be her greatest downfall, but is it? Could there be an even greater threat lurking in plain sight? The Weepers are coming, breaking down barriers, flooding the land with their disease and they are getting close, very close. A vaccine against their deadly bite has not been tested, leaving Emmy vulnerable from yet another quarter. Has time run out for Emmy, the Silver and humanity? Ben and his vampiric minions are on the march and saving London could save the world, but where does that leave Emmy?

Absolutely riveting! Josie Jaffrey has nailed the final book in the Solis Invicti Series as she plunges us headlong into a world of chaos where all the rules of life have changed and one woman will do whatever is necessary to save her humanity and her soul. THE SILVER BULLET rages across the pages in all of its dark glory as vampires fight vampires, blood runs freely and humans become the feeding round for both vamps and zombies alike. This is NOT a quiet read. This is edge of your seat turmoil at its best as Josie Jaffrey brings her world to life once again. Emmy has grown, her heart has been twisted in knots and her life has become a chess piece on a dark and bloody board.
As the last page came barreling into the station, I felt I had run every step with these characters, gotten to know the as more than written words and found an author I want more from!

I received an ARC edition from Josie Jaffrey in exchange for my honest and voluntary review!
Posted by Dii at 10:33 PM