The Terra Debacle: Prisoners at Area 51 by Marcha A. Fox 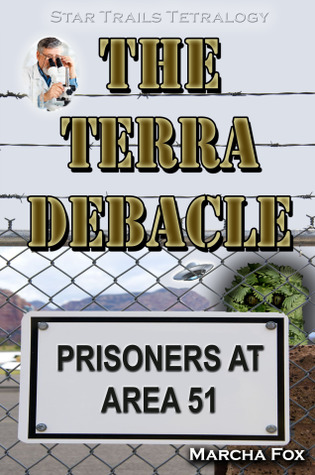 The Terra Debacle
Prisoners at Area 51
by Marcha A. Fox

It's May 1978 and a normal night at Hill Air Force Base in Ogden, Utah--until a bogey shows up in their air space. It gets even stranger when the UFO requests permission to land, then changes its mind, but by then F-16s escort it to the ground. A human girl in her early teens and a robot exit the craft, a strange botanical lifeform found onboard later that night by a USAF landing party. The vehicle, robot, and the strange plant are impounded and subsequently sent to Area 51.

NASA astrobiologist, Gabriel Greenley, PhD, is called in to study this new lifeform that at first appears similar to a botanical species known as oxalis. As a psi-sensitive, Greenley quickly learns the specimen is highly intelligent and potentially dangerous when he attempts to take a leaf sample. He backs off, frustrated, desperate to investigate the scientific details of this new botanical species that combines intelligence with a metabolism based on photosynthesis. Meanwhile, the specimen, a flora peda telepathis named Thyron from the planet Sapphira, is investigating his new environment through all frequencies of the electro-magnetic spectrum as well as his suite of psychic abilities that includes remote viewing.

Greenley eventually gets his leaf sample and makes a ground-breaking discovery that he can never share due to his security oaths and research agreement at this Top Secret facility. Eventually, however, he's confronted by an ethical dilemma that forces him to make a treasonous and potentially deadly decision.

A unique combination of hard science fiction, suspense, intrigue, and a touch of humor, this story has been described as a "dark version of ET: The Extraterrestrial." Strong characterizations, a mysterious setting loaded with intrigue, and unexpected plot twists make this an unforgettable tale whether you're a science fiction fan, botanist, UFO aficionado, or simply enjoy a good story.

The Terra Debacle: Prisoners at Area 51 by Marcha A. Fox

UFOs, aliens, Area 51…no science fiction geek worth their salt hasn’t wondered what secrets lay beyond our planet or what secrets lay buried in one of the government’s most secretive facilities. Are you one of us Sci-fi geeks? Do you believe anything is possible? You’re in luck, Marcha Fox has a tale to tell, one that will entertain non-stop from start to finish!

THE TERRA DEBACLE, a fictitious tale of a captured extra-terrestrial being will tease your mind with Thyron, a sentient botanical life form with the power to communicate telepathically with NASA astrobiologist, Gabriel Greenley, his keeper, his potential tormentor and soon to be his greatest ally and friend. Not only can Thyron communicate, he can walk, no pot-bound plant here! He can even absorb information and stored data at will, something that, if practiced too often for too long of a time, causes a drunken effect which leads to forced dormancy…similar to passing out for humans? Who knows!?

Of course, Thyron is just a “thing” to be studied by many, but his relationship with Greenley becomes more than a cold, scientist to specimen thing and not only does it lead to some hysterical moments, it leads to danger for Thryon and an act of treason for Greenley. As much as I liked Thyron, I wanted him to go home, but will the military decide otherwise? Will they nip the relationship between Greenley and Thyron and potentially all of Earth in the bud? Is this one more dirty little secret at Area 51?

This is their story, science fiction at its best as secrets are uncovered, bonds are formed and one extraterrestrial neighbor fails to get a warm welcome to our planet. Marcha Fox has combined fact, fiction, speculation and just plain fabulous story telling in this fast, fun and furiously entertaining tale that may change the way vegans look at their food!

I received this copy from Marcha A. Fox in exchange for my honest review.
Posted by Dii at 9:22 PM

Email ThisBlogThis!Share to TwitterShare to FacebookShare to Pinterest
Labels: Marcha A. Fox