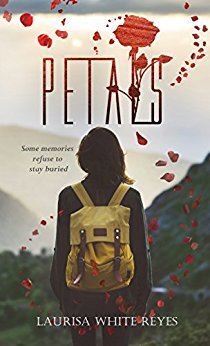 On Christmas Eve, a horrific car accident leaves Carly Perez without a mom. After a year of surgeries and counseling, Carly’s life is nearly back to normal—except for the monsters—vague, twisted images from the accident that plague her dreams. When her father insists on spending their first Christmas alone in Guatemala with a slew of relatives Carly has never met, she is far from thrilled, but she reluctantly boards the plane anyway.

That’s where she first spots the man with the scarred face. She could swear she has seen him before. But when? Where?

In Reu, the Guatemalan town where her father grew up, Carly meets Miguel, her attractive step-cousin, and thinks maybe vacation won’t be a total waste after all. Though she is drawn to him, Carly’s past holds her back—memories that refuse to be forgotten, and a secret about the accident that remains buried in her subconscious. And everywhere she turns, the man with the scarred face is there, driving that unwelcome secret to the surface.

Carly’s last Christmas Eve with her mother will forever haunt her memories, the icy roads, the sounds of the glass and metal, the pain, the surgeries and the limp she will forever have. Carly could never figure out why that last minute gift was so important, but that gift cost her mother her life and gave Carly nightmares that would repeat the horrors over and over, following her everywhere.

Spending Christmas with her father’s estranged family in Guatemala is NOT what Carly wants, a group of strangers, a language barrier and her haunting dreams. And now, a scarred man follows her. He is everywhere, he is nowhere, and Carly is terrified. Who is he? Why is he here? Where does she know him from?

If not for Miguel, her cousin by marriage only, this trip would be a total disaster, but will he believe her about the man she keeps seeing? Is she slowly losing her mind or are the secrets buried deep in her soul from that fateful Christmas Eve connected to the man who will not leave her alone?

PETALS by Laurisa White Reyes is a powerful tale of loss, of grief and lack of closure as Carly struggles to reconcile her past, her father’s family and even her survivor’s guilt with the world she must now live in. Witness the inner turmoil and pain one teen suffers and who it impacts those around her as they attempt to help her move forward.

Laurisa White Reyes’ words are powerful, her story is rich with emotion and her characters come alive as one teen must finally let go of her demons and embrace the love that wants to surround her and give her strength to move forward.

An amazing read for young teens on up, this tale is ageless, raw and filled with flawed humanity at its most fragile and strong at the same time.

I am voluntarily reviewing this copy!