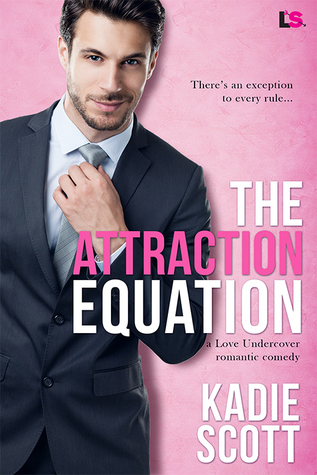 The Attraction Equation
by Kadie Scott

FBI agent Max Carter lives his life by a strict set of rules—rules that don't allow for distraction, deviation…or a relationship. But tell that to his matchmaking mama. To avoid yet another set-up, he announces he has a girlfriend. And now has to produce said girlfriend at Christmas dinner. Maybe Santa has a suitable actress in that red bag of his…

Gina Castillo is about to break her building’s iron-clad “no pets” policy to give her little brother the perfect Christmas gift—a dog. Too bad Max, the most inconveniently sexy tenant in the building, catches her red handed. Gina expects to be evicted, but instead finds herself blackmailed into playing the role of his girlfriend.

Two lies plus one dog should equal a hot mess of a holiday, but attraction and Christmas magic might just defy the rules…

It was just a little puppy, how much trouble could it be to hold on to it for a month before Christmas when Gina could surprise her younger brother? Sure, the apartment she was subletting has a strict no pets policy, but come on… Day one and Gina is busted sneaking the pup out take care of business by the most gorgeous and intimidating man she has ever seen, but he doesn’t look like a rule breaker. And THAT is when things went from bad to worse…or certainly something unlike the carefree Gina has ever experienced.

THE ATTRACTION EQUATION by Kadie Scott is a comedic look at opposites attracting, interfering mothers and what happens when two people are not completely honest with each other, even as they enact their romantic subterfuge.

I have to say, Max was a little difficult to deal with at times, but Gina was like a breath of fresh air, from her quirky ways to her larger-than –life heart!

Get ready to ring in the Holidays with peels of laughter, sweet moments of love and madcap puppy chases, all while watching one sedate and “ordered” man have his world reorganized by the chaos of love!

A wonderful and fun read, because what can be sweeter than love...and Puppies!

I received an ARC edition from Kadie Scott. This is my voluntary review.
Posted by Dii at 5:16 PM