The Warrior's Path by Karim Soliman (Tales of Gorania, #1) 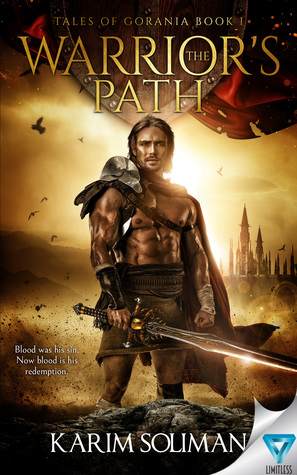 The Warrior's Path
by Karim Soliman

Blood was his sin. Now blood is his redemption.

A true warrior never stains his hands with the blood of an innocent.

Forced to slay his father to avoid committing atrocities of war, Masolon flees the justice of his clansmen, through the madness of the haunted desert, to the fabled lands of Gorania—a journey he survives with his body, but not with his mind.

Tormented by the guilt of his sin, Masolon seeks redemption through the war he wages against the tyranny of lords and the savagery of outlaws. As enemies and false friends close in from all sides, Masolon must discover if it’s possible to find peace in Gorania for his restless heart…while following the bloody path of a warrior.

The Warrior's Path by Karim Soliman (Tales of Gorania, #1)

His mother and sisters, brutally killed by marauders, there is only one way out for Masolon to avoid becoming the warring monster his father orders. He must kill him. Now on the run from the “justice” of his countrymen, Masolon will become a traveler, a foreigner, an oddity to those who live far from his home. He is alone, there is no one to trust with his life, but he will become a commodity for war, a warrior, his abilities used as a weapon of death and entertainment for the masses. Through it all Masolon will refuse to become like his father, but will become a leader among warriors who fight for the masses against tyranny and the outlaws who pillage the land.
Even as the weight of his guilt and isolation shroud him in his own cocoon, Masolon will find that one fiery woman will awaken his heart and his very soul.

THE WARRIOR’S PATH by Karim Soliman is a tale of survival, of personal growth and redemption and the honor of one young man alone in a world that is harsh and unforgiving to its inhabitants.

Karim Soliman has created a world and an atmosphere filled with tension and distress where power and strength come at the end of a bloody blade and enemies are easier to make and find than allies. From the stark beginnings of this tale to the action of battles and contests, we witness a young man who holds everything in, sharing nothing and keeping his past mysterious. Masolon’s character feels alone in the world. The guilt he feels rises throughout this tale, and trust me, from page one to the end, I witnessed each scene as if being there, from the smells of filth and sweat to freezing dungeons and beyond. The few moments of joy are like fresh air and sunshine and one can only root for the lost soul in a foreign land, even as his skills as a warrior are tested and proven time and again.

Fascinating reading that carries the reader into the story and refuses to let go, even after those final words. It takes a creative author to build a believable world out of nothing, and to fashion a remarkable character into a living and breathing entity. There is a sense of high inner emotional turmoil, chaotic external action and a long journey undertaken!

I received this copy from Karim Soliman and am voluntarily reviewing it!