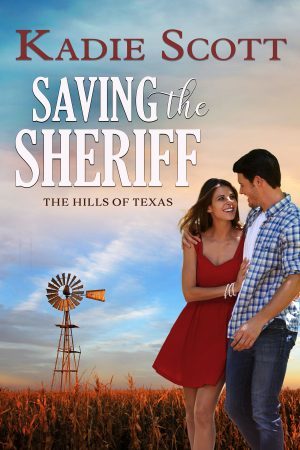 Saving the Sheriff
by Kadie Scott

The day his wife died, Sheriff Cash Hill discovered she was leaving him for another man, one she’d loved since before their marriage. How could the single dad ever trust another woman again? But when Georgia’s best friend, Holly, comes back to town, something about Holly’s sweet, sassy vulnerability has his protective instincts kicking in hard.

Holly Jensen left La Colina, Texas with regrets. She’s returned home to work as the new large animal vet and to watch over her best friend’s daughter. But Holly’s knowledge of Georgia’s past could rip a family apart. And she’s reluctant to go to the sexy…and single…sheriff, as he’s made it clear he wants nothing to do with her.

Both are faced with a choice…stay locked in the past or allow their reservations to be silenced by a passion hotter than Texas summer nights. Can they learn to trust their own hearts and each other?

Sometimes the hardest thing to do is save someone from themselves. Sometimes you need to throw yourself under the bus to do so and hope for the best, especially when you are doing the right thing.

Kadie Scott’s SAVING THE SHERIFF is a story of secrets, lies, love and loss and the ugly scars that can be left on the soul if one cannot/will not move forward. When Holly Jensen came back to La Colina, she brought the weight of the past with her, the secrets she kept for her best friend. Now Georgia is gone, leaving behind a daughter and a husband she was going to leave for another.

Holly has always had a crush on the handsome Sheriff Cash Hill and even though time has passed, her feelings haven’t changed. Too bad Cash sees her as his late wife’s best friend and totally off-limits, even as a friend. When Holy is forced by her conscience to do “the right thing,” even though she knows it will hurt several people she cares about, Cash decides she is definitely public enemy number one, even though his heart keeps saying there is more to the story and the woman.

Will destiny, a collision of the past and present destroy any future these two may have had? The truth can hurt, but it can also heal and maybe it’s time for the Sheriff to move forward.
An emotionally tumultuous tale where, if everyone would listen to their hearts, the problem would be solved! Physically, there is a slow build, then a drop, then a buildup that was refreshing to see.

Cash is a bit aggravating at times, pushing Holly into the “enemy” camp while still giving off “I want you” vibes. Does he not realize that love and hate are two very potent emotions with the exact opposite effects? Guilt by association is not true guilt? And Holly? Wow, she is strong, but vulnerable, and not in a bad way, she had heart and I liked that.

If you’re looking for romance with a touch of country charm and a darling child to amp up the sunshine factor, Kadie Scott has it, right here!

I received a complimentary ARC edition from Tule Publishing!