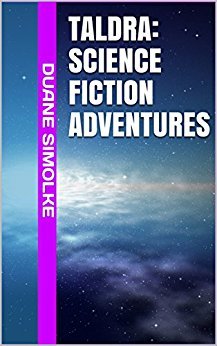 Set in an alternate reality, the Taldra adventures focus on gays, people of color, and powerful women. Books 1 and 2 of Taldra both appear in this specially priced collection.

Degranon: A Science Fiction Adventure flings an Iroquois family into a battle across time and space.

In an alternate reality, Earth is the planet Valchondria. No illness exists, gay marriage is legal, and everyone is a person of color. However, the Maintainers carefully monitor everyone’s speech, actions, and weight. The Maintainers also force so-called “colorsighted” people to hide their ability to see in color.

The Iroquois scientist Taldra thinks of her twin gay sons as the hope for Valchondria’s future, but one of them becomes entangled in the cult of Degranon, while the other becomes stranded on the other side of a doorway through time. Can they find their way home and help Taldra save their world?

In Sons of Taldra: A Science Fiction Adventure, alien shapeshifters want to feed on humanity. Taldra again relies on her sons to help protect Valchondria. The Maintainers still hold dark secrets that might pose an even greater threat than the invaders. World events and Native American storytelling inspired this sequel to Degranon.

Imagine a world where civilization doesn’t see the color of your skin, where your sexual preferences are a non-issue and illnesses have been eradicated. Sound too good to be true? In this alternate reality, there are still warts, lies, secrets and “Big Brother” is watching, monitoring, waiting to pounce…Valchondria’s world is far from a Utopia, but the human spirit is strong when tested. Enter Duane Simolke’s world of science fiction and feel yourself transported to a different Earth in a different reality where right and wrong can become another shade of gray.

A brilliant scientist and her husband are searching feverishly for the portal that will connect their world with their past, the world they came from, the world whose teaching and faith they believe they follow. But do they? People are monitored for their speech, their actions and even their weight. Even the ability to see colors is a dangerous thing to have in a world where shades of gray just might be another form of control. Each couple is allowed only one child, because resources are dwindling and the very scientist who is at the cutting edge of delivering them back in time to their home world is about to break the law, through no fault of her own. Taldra is pregnant with twins and finding that portal may be the only way to save both of her sons as she is forced to send one through and can only hope to see him again. These twins may grow be the saviors of their world if betrayal, jealousy and the quest for power doesn’t silence their family from telling the truths they have learned.

Interesting to note that while basing his tale around people of color, author Duane Simolke also chooses to make the “normals” in his world colorblind. DEGRANON is a fascinating alternate Earth science fiction that proves that even if we find a world where humanity is accepted for their skin and sexual preference, there will always be something new to find fault in when a world lives with corruption hidden in the halls of power.

Book two of this two-book read is SONS OF TALDRA. This time out Duane Simolke focuses on the changes made when Maintainers and the government are overthrown, Taldra has become the new leader and her long lost son has been returned through the portal. With both of her sons at her side, they are now forced to spearhead the defense against an alien invasion, but who has invaded whose airspace and planet? A long hidden pact is revealed, but monstrous and seemingly invincible invaders have landed, decimating buildings and killing innocents for “food” in the name of justice and revenge. Have the aliens been wronged? Have Taldra and her world been lied to for centuries?

Once again, the theme of persons of color, particularly Native Americans and their legends are brought to life as one woman, along with her sons and their lovers must maneuver through a newly awakened society and the evil that threatens it. Lies will be revealed, heroes will die, but a new world will be born to freedom and their eyes opened to the beauty of the colors of life.

Duane Simolke’s characters are vital and alive. His handling of gay relationships is not highlighted as a rallying cry, but rather presented as another normal aspect of a world with a myriad of other problems, such as survival and now learning to live in a world that is not ruled through spying and rigid controls allowing only accepted language or ideas. False gods and beliefs will be revealed and the best of humanity will rise.

Edge-of-your-seat action, scenes that detail the turmoil and terror of an alien attack and an inside look at love and acceptance for humanity’s differences. Great world-building, great storytelling!

I received a complimentary review copy from Duane Simolke!