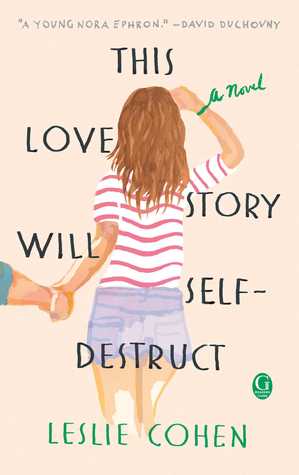 This Love Story Will Self-Destruct
by Leslie Cohen

This is the classic tale of boy meets girl: Girl…goes home with someone else.

Meet Eve. She’s a dreamer, a feeler, a careening well of sensitivities who can’t quite keep her feet on the ground, or steer clear of trouble. She’s a laugher, a crier, a quirky and quick-witted bleeding-heart-worrier.

Meet Ben. He’s an engineer, an expert at leveling floors who likes order, structure, and straight lines. He doesn’t opine, he doesn’t ruminate, he doesn’t simmer until he boils over.

So naturally, when the two first cross paths, sparks don’t exactly fly. But then they meet again. And again. And then, finally, they find themselves with a deep yet fragile connection that will change the course of their relationship—possibly forever.

Follow Eve and Ben as they navigate their twenties on a winding journey through first jobs, first dates, and first breakups; through first reunions, first betrayals and, maybe, first love. This is When Harry Met Sally reimagined; a charming tale told from two unapologetically original points of view. With an acerbic edge and heartwarming humor, debut novelist Leslie Cohen takes us on a tour of what life looks like when it doesn’t go according to plan, and explores the complexity, chaos, and comedy in finding a relationship built to last.

Boy meets girl, girl doesn’t even acknowledge him on her radar, perhaps because he is reasonably safe, a little bland, not a bad boy? Eve is anything but stable, mature, she is a dreamer, waiting for her dreams to arrive and unfold themselves in front of her. She likes to think she is living life on the edge, but her own thoughts and insecurities keep tripping her up.

Ben is a young man who thrives on order in a chaotic world. He isn’t worthy of Eve’s notice until years later when their paths continue to cross long after they were “out in the world,” and even then, it isn’t some magically, eye-opening experience, but there is something. The pull of opposites attracting? Eve finally deciding to get off the crazy train and grow up just a little? Ben needing to add a pinch of chaos in his orderly world?

Funny how a character can irritate a reader, especially when she is so realistic, shallow, but far too realistic. Eve is that girl who wants to live life in the fast lane, complete with the drama, the bad choices and the ability to do it all in the shallow end of life. She has been damaged by her past, and it becomes her shield, her reason for why she is the way she is, which is often unappreciative (ie: her stepfather and her attitude towards the man).

I wanted to know more about Ben. Being less “volatile or quirky” doesn’t mean he isn’t just as complex.

Love is a funny thing, there is no rhyme or reason, it’s an attraction that just is. Real love doesn’t worry what others think, it isn’t life in the fast 24/7. Will Eve learn this before it is too late? Perhaps she will never find that “perfect love,” perhaps she will find what she needs as opposed to what she thinks she wants. Will Ben be there to cross her path one more time?

THIS LOVE STORY WILL SELF-DESTRUCT by Leslie Cohen is superbly written, there is no doubt that Ms. Cohen is a gifted wordsmith. She did evoke emotions from me, not sure all were good ones, but I was drawn in, partly because I needed to hope I could find that missing connection, that AHA moment when everything made sense and I could return to reality feeling settled, feeling I could like BOTH main characters. It didn’t happen, but maybe it’s just me, because I DO like Leslie Cohen’s sense of writing style, sharp, edgy and strong enough to create a world where not everyone feels warm and fuzzy.

I received an ARC edition from Gallery Books in exchange for my honest and voluntary review.