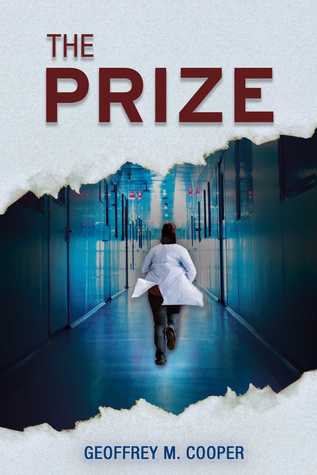 The Prize
by Geoffrey M. Cooper

What does it take to win a Nobel Prize? Deceit, fraud, even murder? Set in the competitive world of cutting-edge medical research, The Prize is a science thriller in which jealousy over the discovery of a treatment for Alzheimer's disease leads to fraud, betrayal and violence.

Pam Weller makes the discovery of a lifetime when she finds a drug with the potential for treating Alzheimer's. But her success threatens the supremacy of Eric Prescott, a leading figure in Alzheimer's research. Lusting relentlessly for the Nobel Prize, Prescott fears that Pam's work will derail his ambitions. He seduces one of Pam's research fellows and enlists her in a plot to brand Pam a fraud and steal her discovery. But when an investigation threatens to uncover their plot, Prescott kills his co-conspirator and fakes a suicide that places the blame squarely on Pam. Leading Pam into a world where nothing is real, except threats to her career, her freedom and even her life.

In a novel of intrigue and suspense, The Prize explores the human side of science and drug discovery, exposing the pressures and ambitions that can drive the betrayal of scientific ethics and lead to fraud in medical research.

Fabulous. Medical. Thriller. If you are a fan, that is all I need to say. Geoffrey M. Cooper’s THE PRIZE is a slice of the often ruthless world of medical science, meticulous research and breakthrough discoveries. It is also a tale of the endless egos involved, the political machinations and dog-eat-dog world of research grants, which in turn provide an opportunity for the “crowning glory”…The Nobel Prize.

Wouldn’t it be nice if researchers were solely dedicated to discovering cures for human ailments? Sadly, like everywhere else, money talks and like trained rats, when researchers hear the whisper of money’s call, they will jump through any hoop to continue their studies. Ever wonder how many miracles have never been found because there was no fortune to bring fame?

Pam Weller and her team have found a miracle! Their testing has discovered a cure for Alzheimer’s, but a bruised and over-inflated ego will prove that one researcher is NOT a team player. Not only will this woman play footsie with a rival researcher, she will do everything in her power to discredit and destroy the valued reputation of a hard working scientist, all because of her ego. Karma may come around for this traitor, but at what cost to the cure? What cost to the millions who suffer from or are affected by Alzheimer’s?

Geoffrey M. Cooper tells a solid, and stark tale of scientific espionage, murder and deceit as he crafts edge-of-your-seat reading with razor taut tension. Start to finish, we wait for the blade to fall, for evil to be vanquished in the name of science and humanity, but will it? One can never tell when people play god with human lives…all to win THE PRIZE.

I received a complimentary copy from Geoffrey M. Cooper!