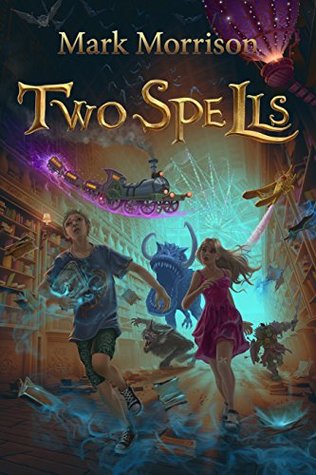 Sarah and her twin brother Jon are heirs to an ancient magical realm and its most valuable treasure, an enchanted library. The library endows readers with the supernatural means of crossing into the uncharted inner-sanctum of the second dimension, inhabited with peculiar and sometimes perilous creatures.

The children are emboldened with a wondrous mystical gift that no other being has ever possessed. But fate intervenes and triggers a disastrous inter-dimensional war that disrupts the fabric of time and space spanning multiple universes, tearing destiny a new and savage pathway.

The two must rescue their world from a phantom hybrid alien race controlled by a demented dark-wizard, Jeremy Sermack. They will either assimilate or be exterminated.

Will they be the saviors the prophets spoke of, or will they retreat to the perceived safety of their distant homeland?

Going to Grandma and Grandpa’s house is always an adventure and for twins Sarah and Jon, that adventure would take them to a magical realm where its greatest treasure is an enchanted library! We all know that books can be magical journeys into mystical realms, but for Sarah and Jon, the journey they undertake will be more than they could ever have imagined.

TWOSPELLS by Mark Morrison hits the ground running and the rapid-fire action never quits, sure to hold the attention of young readers from start to finish! Lots of quirkiness, colorful characters, danger and adventure in spades, not to mention the “truths” of reading that are cleverly hidden within.

Mark Morrison does a great job of building a mysterious and magical world that is alive with color and splash without feeling weighed down with oversized detail. TWOSPELLS feels like a middlegrade adventure with its high action and high velocity, pace, yet, there were times that the humor felt a little older. Definitely too young for young adults, but certainly a read that will draw even a reluctant younger reader in. Fast, fun and furious with characters that are vibrant and alive, if not a little scary at times, as two siblings find a new world and a prophecy that only they can fulfill.