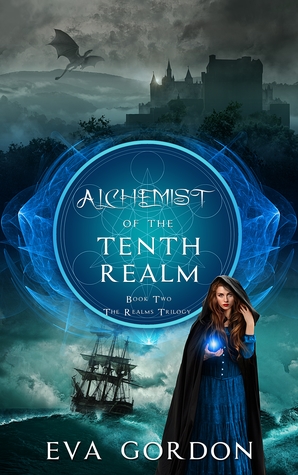 Alchemist of the Tenth Realm
by Eva Gordon

Heroes of the War against the Guild of the Golden Rose, Sophie and Logan risk leaving the comfort and safety of Skye to colonize the dangerous untamed territories of the Newlands, a continent that parallels America, but one of magic.

Before they can embark on their new life, Sophie is trapped by a necromancer’s weapon. Under its spell, she is shanghaied on a ship heading for the Newlands where the Guild of the Golden Rose plans its resurrection as the Norvis Ordi.

Desperate to rescue his wife, Logan crosses the perilous ocean and joins forces with a young wizard and native skinwalkers to battle the dark forces that trapped Sophie. Can the Newlands be saved from necromancy or will darkness once again resurface, enslaving all?

They have given their all to save the tenth realm. Now Sophie and Logan are once again daring the Fates by venturing into the unknown, prepared to colonize the Newlands. But their quest will become a nightmare of epic proportions when Sophie is spelled by the dark magic of a necromancer and taken hostage in a vile act of vengeance and the quest to control the powers she holds.

The Guild of the Golden Rose is back, building a stronghold in the Newlands and christening themselves the Norvis Ordi, and Logan will stop at nothing to get his mate back. Hell hath no fury like a werewolf whose mate has been taken…

As Logan journeys to the Newlands, his honor will be tested, as will his faith that Sophie is still alive. New allies will be found among native skinwalkers and a young and untested wizard will prove invaluable.

Meanwhile, Sophie will be powerless to escape, her abilities bound and her link to Logan too fragile for her to hold out hope for rescue. As she plots her own escape, she will find an ally among the dark forces of magic, will it be enough if Logan doesn’t find her?

Eva Gordon’s ALCHEMIST OF THE TENTH REALM is filled with uncertainty for Sophie and Logan as each endures the dangers of the Newlands and the threat of the darkness of the Norvis Ordi.

Once again, the passions of her characters and the atmosphere high in tension jump off every page as evil wreaks havoc in the realm Sophie now calls home. Eva Gordon fires up another fabulous fantasy filled with the perils of the unknown. Moments of lightness, tests of strength and wills, and revelations regarding the Newlands bring this tale to life as two souls will stop at nothing to reunite.

I received a complimentary ARC edition from Eva Gordon!