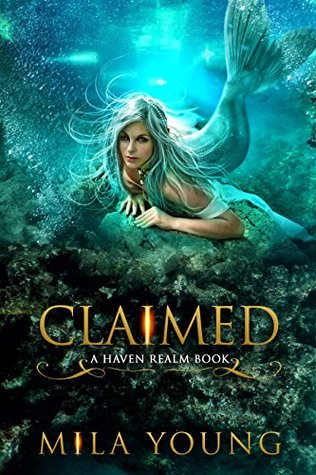 Nyssa's not your typical princess. She rebellious, and sneaks down to the Shark Bait bar with her friends, to get away from the pressures of palace life. Each time a hot Sharkrider chats her up, she develops a serious case of fin in the mouth disease, and embarrasses herself. All that changes when her father announces she's to marry the cruel and scheming commander of his army. She'd rather digest in the belly of a whale than marry that slug.

When Nyssa digs a little deeper, she uncovers that the commander is using a spell to control her father. In wedding her, the commander plans to kill the king, and rule the underwater realm. With the help of three mersoldiers who pledged their allegiance to her, Nyssa must save her father and the kingdom. Now she must navigate new emotional currents while keeping her head above, or below, water...even if that means drowning in the soldier's love.

Mermaids, loyalty, passion and vengeance collide in this spellbinding romance that finds its 'Happily Ever After.'

A beautiful mermaid princess will go from secret rendezvous in “dive” bars to a woman on a mission to save her underwater kingdom when evil rears its ugly head and makes plans to make her his bride. Sounds pretty ominous, I know, but Mila Young’s tale is anything but dark as she takes us into the deep blue sea in CLAIMED.

Grab your snorkels, prepare for a quirky, sexy dive into what really goes on beyond those swim markers, past the riptides and below the waves just begging to be surfed. Words will be ‘played on,” a pact with an evil water witch will be made and Nyssa will discover that three handsome mersoldiers are better than one, (if you know what I mean!)

In spite of Nyssa’s dire circumstances, the fate of her father’s kingdom, and a near impossible quest, CLAIMED is a fun read with lots of fins, seemingly insurmountable odds, smelly pirates and hot mersoldiers who are warm for Nyssa’s form and loyal to her cause.

Quirky, with almost too many fishy quips and nicknames, I still had a great time in Mila Young’s world with a Little Mermaid like you never imagined! Let go of reality, take the plunge, feel the heat, join the adventure!

I received a complimentary copy from Mila Young!