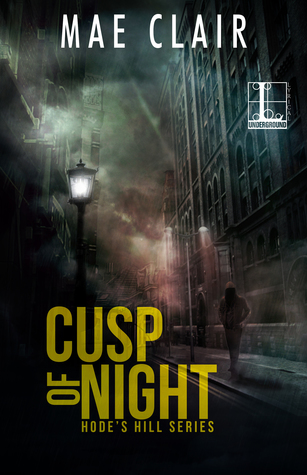 Cusp of Night
by Mae Clair

Recently settled in Hode’s Hill, Pennsylvania, Maya Sinclair is enthralled by the town’s folklore, especially the legend about a centuries-old monster. A devil-like creature with uncanny abilities responsible for several horrific murders, the Fiend has evolved into the stuff of urban myth. But the past lives again when Maya witnesses an assault during the annual “Fiend Fest.” The victim is developer Leland Hode, patriarch of the town’s most powerful family, and he was attacked by someone dressed like the Fiend.

Compelled to discover who is behind the attack and why, Maya uncovers a shortlist of enemies of the Hode clan. The mystery deepens when she finds the journal of a late nineteenth-century spiritualist who once lived in Maya’s house—a woman whose ghost may still linger. Known as the Blue Lady of Hode’s Hill due to a genetic condition, Lucinda Glass vanished without a trace and was believed to be one of the Fiend’s tragic victims. The disappearance of a young couple, combined with more sightings of the monster, trigger Maya to join forces with Leland’s son Collin. But the closer she gets to the truth, the closer she comes to a hidden world of twisted secrets, insanity, and evil that refuses to die . . .

The Fiend is as much a part of the lore of Hode’s Hill, Pennsylvania as the Hode family is, itself. Newcomer Maya Sinclair becomes caught up in the mystery of the serial killer who terrorized the town in the late nineteenth century, but she never thought she would witness its evil return. The past has come back with a vengeance as Leland Hode is viciously assaulted by the Fiend and Maya comes on the gruesome scene on her walk home alone, late at night. Has the Fiend returned? Has it ever left? Monstrous in size, powerful and deadly, terror reigns once again and Maya will discover that perhaps it is more than mere coincidence that she moved to Hode’s Hill.

Every powerful family has their enemies, and the Hodes are no exception, but as Maya digs deeper into the past, she uncovers the mystery of the Blue Lady, a powerful and sought-after spiritualist, believed to be the first tragic victim of the Fiend. Who was the Blue Lady with the heartbreaking life and dark secrets? Was she a monster or a woman plagued by an affliction that left her open and starving for any attention she could find? She once lived in Maya’s house and the answers may lie in the walls that witnessed so much…if only walls could talk…

Mae Clair takes us on a twisted journey through time and back in her latest mesmerizing read, CUSP OF NIGHT. The feel of the 1890’s comes to life, with its dark secrets, heinous betrayals and the jarring inner pain of a woman used for the very differences that forced her to grow up labeled a freak and a monster. What drives Maya to unearth the past with such obsessive fervor? Has Maya’s own past created a connection beyond the veil of death? One man is determined to help her, and together they will learn the nightmare called the Fiend is very much alive…was it ever dead?

Absolutely one of Mae Clair’s best paranormal mysteries to date! I could feel the change in eras, the emotions, I found my own monsters in so many of these characters and had to ask myself, who were the real victims? Deviously dark, this tale unfolds like a coiled snake ready to strike at any time and through it all, the webs that are woven grow into a barbed tapestry of suspense.

Too many riveting, entangled events to dismiss, you may find yourself dreaming of waking at 2:22 am a little cold and no longer alone…Fabulous reading intrigue from an author who knows her craft!

I received a complimentary ARC edition from Kensington Books/Lyrical Underground! My review is voluntary.