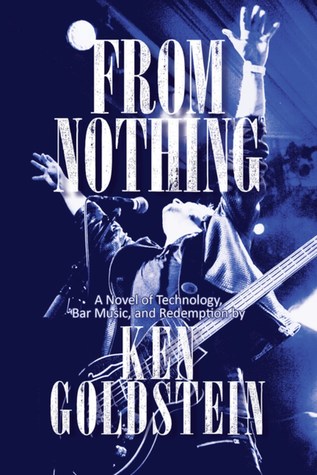 From Nothing
by Ken Goldstein

Victor Selo had blown up his life. A wannabe rock star turned tech savant, he’d wagered his Silicon Valley executive position on a corporate inside straight and lost. Having security escort him out of the building was the best thing that happened to him that day. The rest left him in the hospital, broken, broke, and with no prospects. That’s when a shadowy stranger with questionable motives came with an offer: a chance to get his life back – and better – if he simply cooperates. It would require becoming invisible for a while, but he would be hiding in the spotlight, playing guitar in a Vegas cover band. Reluctantly, Victor accepts and begins an odyssey he never could have imagined. One that involves a charismatic lead singer who owns the stage but aspires to own an Elvis wedding chapel, a mesmerizing woman who can play anything on her keyboards and can really play with Victor’s head, and two specters from his old life offering competing devil’s bargains. Suddenly, multiple futures are opening up in front of Victor. All of them offer opportunity – and each comes with potentially catastrophic risk. Populated with a wide array of colorful characters, brimming with reflections on everything from love to God to the price of commitment, and backed by a great soundtrack, From Nothing is an endlessly engaging work of fiction that will resonate like your favorite song.

When one door closes, will a stage door open? Victor Selo is about to find out what life has in store for him as he begins a wild ride of discovery, re-invention and redemption in an arena where financial blood is shed and guitar licks roll.

Enter the world of Ken Goldstein and FROM NOTHING and feel the cutthroat atmosphere of big business and high tech and the sizzling excitement of the backstage world of music. Realistic dialogue, well-developed characters with personality, agendas and dreams will blur together as one man falls into the chance to live his dreams, but not in the way he imagined.

If you are looking for the inside scoop on what goes on behind closed boardroom doors, thrill at the frenzy of popular music as seen from onstage, this thriller will feed both needs with words to spare for dessert!

Only a master storyteller could so completely marry two worlds with such intrigue and keep the pace hot, heavy and thrilling!

I received a complimentary ARC edition from The Story Plant!