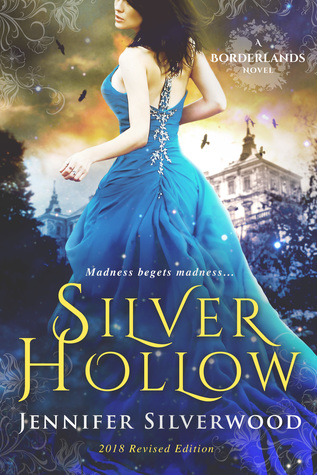 "I shouldn't have to tell you this isn't a fairy story..."

After her parents' car crash ten years before, Amie Wentworth trusts books more than people. She may be a writer, but she believes in reality over fiction. She ignores the unexplained mysteries surrounding her, never mind the dreams of a past life, or the fact she can fry technology with a touch. Not even a timely invitation from her long-lost uncle in England gives Amie incentive for anything other than ire.

Until she is stabbed in an alley and brought back to life by a handsome stranger. Soon Amie is dragged into the very sort of tale she is used to selling. To make matters worse, the man who saved her life keeps turning up and her would-be-murderer is still at large.

After crossing the Atlantic to her father’s homeland, she discovers a world beyond imagining. Silver Hollow is a place of ancient traditions and supernatural dangers, where everything is the opposite of what it seems and few escape sane. Faced with an impossible choice, Amie is forced to confront a deadly family legacy while remembering a life she soon wishes to forget.

**Previously published in 2012. This NEW EDITION has been FULLY REVISED AND EXPANDED. The original novel is now no longer available.**

She writes fiction for a living, but Amie Wentworth believes in reality. She has had to face enough of it in her lifetime, particularly after the crash that killed her parents ten years before. When a letter comes from a long lost uncle, little did Amie know HER reality was about to become the things of fantasy, or madness…and it all began in earnest the night she died, a stranger brought her back to life, and a killer got away…

With the handsome stranger by her side, she is convinced to meet the uncle she never knew in England, just until her “killer” is caught. But no one warned her she was about to enter a world not unlike those she wrote about or that she would be either the heroine or the damsel in distress or that fact is stranger than fiction, and definitely not for the faint of heart.

Jennifer Silverwood’s SILVER HOLLOW IS more than a fairy tale. It is epic in its scope and its promise for more to come! As one young woman discovers why she never quite fit in, she will discover more about her past, her present and her future than she could have ever imagined! Amie will also find the missing pieces of her heart, her life and her destiny.

Brilliant world building on Ms. Silverwood’s part creates an atmosphere of danger and romance as each scene unfolds and we are drawn deeper into Amie’s new reality as it morphs into a true saga with each twist and turn. Incredible characters, a magical atmosphere, and a heroine who comes into her own in spite of the chaos around her.

Love the action, love the world, love the romance, love the chaos and all those delicious secrets…love 'em!

I received a complimentary ARC copy of the 2018 edition from Jennifer Silverwood!