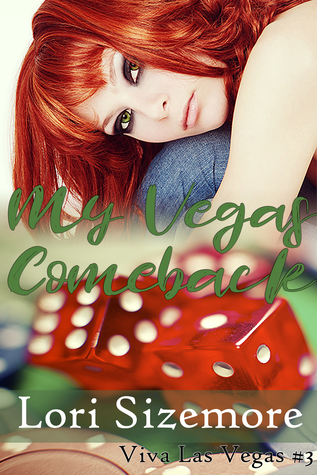 My Vegas Comeback
by Lori Sizemore

In Vegas, everything is a gamble, including love.

Ruby Kendall needs a chance to make a comeback. Her voice made her a legendary singer in Las Vegas, but a scandalous divorce from her scumbag manager has left her unemployable. She’s broke and desperate. But is she ready to take that chance with the man she loved but turned her back on eight long years ago?

Anthony Rosas lost the love of his life when he forced Ruby to choose between their love and her career. Now he’s finally ready to take a gamble on love. This time, he’ll support the very career that took her from him. But he wants to be more than just her manager. He wants back the dreams they lost.

They come together with a heated desire that the years couldn’t extinguish. But the odds are against them. In 1950’s Vegas, a divorced lounge singer is hardly suitable wife material. Not to mention her abusive ex, his disapproving parents, and the fact that Ruby is all out of trust.

Can they beat the seemingly insurmountable odds and let true love win this second time around?

My Vegas Comeback by Lori Sizemore

What a difference an era makes. What the twenty-first century wouldn’t bat an eye at, the 1950’s would find eyebrows raised to the hairlines as gossip fodder.

She has the voice, the looks and the stage presence to be a star in Vegas and beyond, but when Ruby Kendall became a divorcee, her ex-husband/ex-manager made sure she was blackballed in every venue she should have shone. Now she is broke, desperate and all alone.

Anthony Rosas knew Ruby was the love of his life, but he lost her to her dreams of fame and stardom. Now she is back in his life and he is determined to help her break back into the business and into his arms. Can Anthony break through the brick wall created by Ruby’s manipulative and vindictive ex? Sometimes the chance to fulfill one’s dreams comes along more than once. This time Anthony is determined to make both his dreams and Kendall’s come true, in spite of any obstacles in the way…

MY VEGAS COMEBACK by Lori Sizemore transports us back to the fifties, to an alien way of thinking that is hard to comprehend and to the dirty tricks and threats a man with perceived power could play. Kendall comes across as a strong woman beaten down by circumstances, but determined to follow her dreams once again. Anthony clearly has been adrift, with no direction until Kendall came back into his life.

A sweet love story with an edge and a possibility for dreams to come true!

I received a complimentary ARC edition from Lori Sizemore!