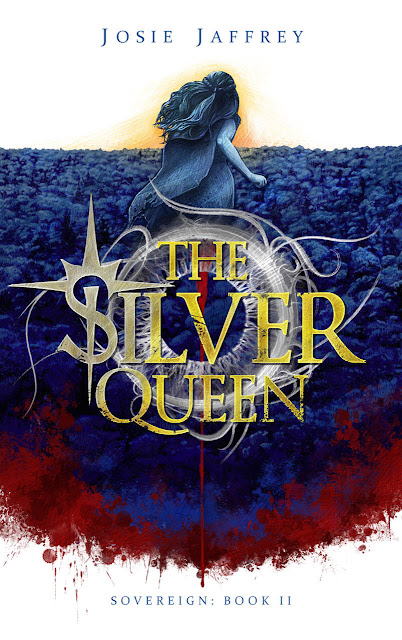 The Silver Queen
by Josie Jaffrey

What blood contaminates, only blood can cleanse.

The last city on Earth is contaminated. Now blood is the only thing that can wash it clean.
Julia is trapped inside the Blue as the Nobles fight over the few humans who are still alive. When the dust settles and she finds herself shackled to a new master, she knows she must escape or die.
Meanwhile, Cam has gathered a handful of comrades and is on his way into the Red to rescue his queen. But not all of his friends can be trusted, and not all of them will make it back alive.
The Silver Queen is the second book in Josie Jaffrey’s Sovereign trilogy, set in a dystopian Europe where vampiric Nobles control the last remnants of the human race.

Vampiric nobles control the Earth and all of humanity. The last city standing is on the brink of destruction as the blood supplies become contaminated and the Blue has been breached by the outside Red. Is the Red really a land of death and desolation or have the humans been told lies to keep them compliant? Only the brave or the desperate would venture out there…

Josie Jaffrey takes us back into this dystopian world with another highly emotional, razor-sharp and magnetic read, THE SILVER QUEEN as the search begins to find the lost queen to save their world and their king while one brutalized human braves escape into the unknown when death is preferable to her existence within the Blue.

Loyalties will be tested, traitors will hide in the midst and the threat of contaminated blood, the unknown and failure loom. Will this be the end of the vampire rule? Is humanity prepared to take over or will chaos be the final master?

Forget about racing through your reading, the tempo will change and it brings another layer of atmosphere and depth to an already brilliant creation from this author. The unknown is always looming just ahead and I held on to each page as another layer was exposed, another twist unraveled!

Dark, gritty and filled with deviously delicious twists, Josie Jaffrey has taken center stage on another amazing read! She has, once again, managed to bring it all together with characters of depth, dialogue that screams natural and an atmosphere that makes chaos seem tame.

I received a complimentary ARC edition from Josie Jaffrey!