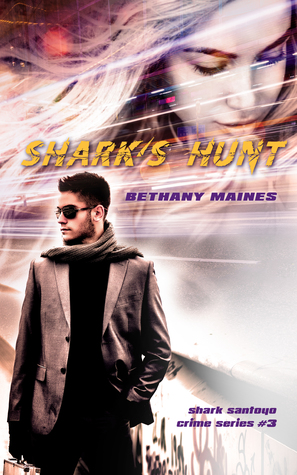 Shark Santoyo knows his life is complicated. He's a top level lieutenant to Geier, head of The Organization, and he's in love with Peregrine Hays, the girl who saved his life with her sharp knives and even sharper mind. But after being blackmailed into abandoning Peri, by her uncle Al, the ex-special forces private investigator, Shark also knows he must focus on his mission—bring down Geier.Peregrine Hays knows her life is complicated. She’s got college around the corner and she’s also hunting down the gang of murderous sex traffickers who killed her best friend five years ago. With lives on the line, Peri knows she can’t be distracted by the fact that Shark Santoyo, love of her life, hasn't called in months—she has to focus on her mission.But both Shark and Peri’s missions are complicated by a brewing gang war between The Organization and the Scarecrow Jacks. And when Geier sends Shark head-hunting against the Scarecrows, Shark finds his paths crossing with Peri once again. And soon, Shark finds that he may be forced to rely on the man who hates him, Peri's uncle Al to not just make it out alive, but to save Peri.

Shark is still on the hunt to take the head of The Organization down, a dangerous mission, especially as he must do so from the inside out. One slip up, one second without his head in the game and Shark will become shark bait and now Peri’s Uncle Al has issued his own threats if Shark doesn’t keep his hands off her. There is also that small matter of her age…

Peri is closing in on the sex trafficking ring she has vowed to take down, but will she get too close and become snagged in their net? Since Shark mysteriously fell off the face of the Earth, she not only lost a piece of her heart, but the one person she knows would have her back.

Neither expected to cross paths again just when they needed each other most…nor did they expect to find an ally with mad skills once hidden in a drunken haze.

Bethany Maines third book in the Shark Santoyo Crime Series has once again set the bar even higher on the “Must Read” scale with SHARK’S HUNT! Anti-heroes, bad guys, uncles and the dynamic crime-fighting duo of Shark and Peri equal reading bliss, especially if you like some heart, brains and wit with your down-and-dirty grit.

Make no mistake, this is real crime fiction with a contemporary flair that explodes off the pages with action that is nail-biting and a plot that will push all your buttons. Peri and Shark may not be by-the-book heroes, but they give THIS book a true sense of what heroics can be without being all dark and broody!

All I can add is read it and you’ll see what I mean.

I received a complimentary ARC edition from Bethany Maines!