Who Wants Forever by Dena Garson 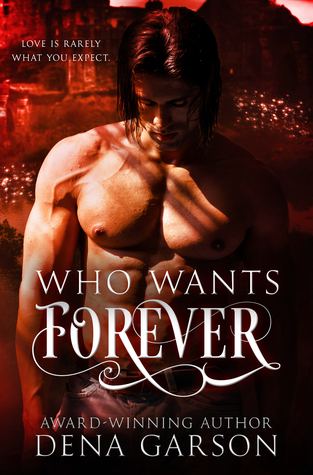 Who Wants Forever
by Dena Garson

After centuries of searching for his heartmate Amarande Maniaci signs up for the Bachelor Trials being held at Tullamore Castle by the Vampire Council of Lords in hopes that he’ll find a satisfactory mate. On the first night of the competition he spots a woman who sparks life in his long dead heart. No matter how much he tries to remain focused on his goal, he cannot fight his attraction to Reaghan. It is a shame she is human...or so he thinks…

When Reaghan’s cousin, the fae queen, asked her to travel to the human realm and find the daughter of one of the First Families, she hoped she could make it through the vampire clan meetings undetected and unscathed. She didn't count on being distracted by Amarande, the lethal, yet oh so sexy vampire enforcer. If only he wasn’t a vampire…

But the threat of another vampire-war war looms. If Reaghan doesn’t return in time with the information the queen needs, the three hundred year old peace treaty between the races could fail. But a fae disguised as a human, looking for a missing fae, without the use of her powers is a lot harder that it seems. Especially when someone doesn’t want news of the girl making its way back to the queen.

Reaghan and Amarande’s new found love may be the only thing standing between the real villain and a world on fire.

Who Wants Forever by Dena Garson

Can a vampire and one of the Fae find their true mate, in spite of the obstacles placed before them? Sometimes Fate brings two beings together against all the odds of the universe…

Welcome to the Tullamore Hotel, steeped in Irish history and things that go bump in the night and now, the host for the Bachelor Trials for single male vampires to show their worthiness as a mate! Meanwhile, the Fae Queen must send her cousin, Reaghan to the event, undercover as a human violinist, all to discover what has happened to a beautiful young Fae. Has she been kidnapped by an evil vampire or has something less nefarious, but just as upsetting happened?

Amarande Maniaci is a vampire enforcer, lethal, feared and now desperate to find someone to share his long life with. He couldn’t have known the tiny human with the musical gift would cause his long dead heart to beat…a human? Or is she more?

Dena Garson’s WHO WANTS FOREVER is a wonderful take on love and intrigue between the Fae and the vampires as she builds a world that comes to life around two main characters who are both strong, bold, independent and have hearts of gold, beating or not! Moments of daring, tenderness and revelations keep this tale running along as smooth as silk!

Wonderful reading, sweet, yet not sugary, I love when characters have inner strength on their own that is only magnified by working together! Ms. Garson’s tale is a brilliant gem for lovers of romance and a desperate race against time. Easy to fall into, nothing over-the-top, a fabulous escape with fabulous characters!

I received a complimentary ARC edition from Dena Garson!