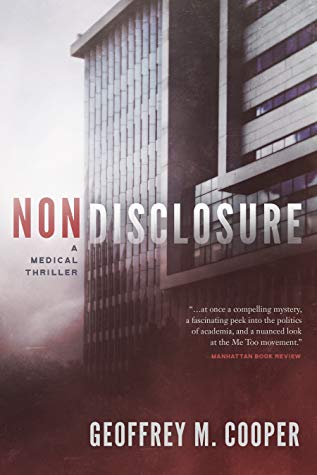 When a leading professor at a top-tier medical research institute accuses a colleague of drugging and sexually assaulting a student, department chair Brad Parker and university detective Karen Richmond join forces to investigate, only to be stymied by a victim who can't remember what happened. But as fragments of memory resurface, she's brutally attacked and murdered. The conclusion is obvious, but in the absence of forensic evidence, police hit a wall—until Brad and Karen's inquiries take an unexpected turn that not only threatens their own lives, but exposes a cover-up at the highest levels of the university.

Nondisclosure: A Medical Thriller takes a frightening look at a culture that promotes sexual misconduct in academic life.

Academia, the hallowed halls of education, research and the true test of the human brain to excel. Among the cerebral hide the monsters, the power mongers, those charged with molding and stretching young minds who would also become sexual predators and possibly cowardly killers. Enter Geoffrey M. Cooper’s world where the rules of NONDISCLOSURE give free reign for the monsters to move on and devour new prey.

When a colleague is accused of sexually assaulting a student, department chair Brad Parker will become part of the investigative team to prove or disprove the charges. Out of his comfort zone, he soon finds the thread that will lead him through a maze of deceit and cover-ups as the great machine barrels forward hiding the skeletons in the closet that could end the financial boons for research.

Geoffrey M. Cooper adds enough grit and enough mystery to hold readers enthralled while exposing sexual harassment for what it is, a hideous act of a twisted mind.

Wonderful scenes and settings, characters out of their comfort zone, yet willing to do whatever it takes for justice.

Page after page of bold storytelling that will unravel the truth at the end without using over-theatrics, just gifted writing.

I received a complimentary ARC edition from Geoffrey M. Cooper!