Eve of Ascension by Daniel McMillan (The Fall of the Ascendency, #1) 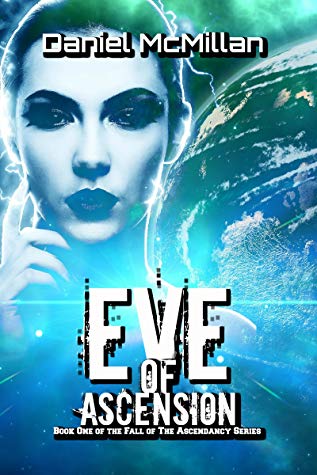 Eve of Ascension
by Daniel McMillan

LIFE IN THE ASCENDANCY WAS NOT ALL THAT IT APPEARED...

When an attempt at establishing a World Government seems destined to fail, the global elite seek refuge on a space station and crash an asteroid into the Earth to "bring the population down to a more manageable level".
Once the world was sufficiently healed from the Cataclysm, the elite reappeared and established The Ascendancy. They offered refuge in twelve new cities around the globe - all survivors had to do in exchange was give everything they could for the betterment of the government.
Baxter Clarke grew up in the city of Enswell, enjoying the highest comforts the Ascendancy provided thanks to his brilliant father's contributions.
But when Baxter discovers a connection that upsets the balance he has been familiar with all his life, he finds himself in a situation he never dreamed possible.
Now, with the fate of the Ascended attached to a device stolen from a government agency, he will have to run for his life and leave the city to save his people and rise to be the man he was meant to be.

Eve of Ascension by Daniel McMillan
(The Fall of the Ascendency, #1)

Life in the Ascendancy is a dog eat dog world, all while putting your best face forward. A man-made catastrophe winnowed out the “excess” and the elite rose to power, dangling the carrot of success, and a chance to get closer to “the top” of the heap. It is there that all of your dreams can come true and you will be the envy of all. But you know what they say about something that seems too good to be true…

Daniel McMillan’s EVE OF ASCENSION is a brilliantly horrific science fiction tale in a world of haves and have nots, a government who rewards excess for its own benefit. Along with the blind sheep, there are the rebels, the ones who see things as they are and they strive to take down corruption at its very foundations. One brilliant young man will discover that, although his world is near perfect, there is something missing, something not right, it will be the death of his father as a criminal that will turn the key to hidden truths, upsetting the view he always knew. What Baxter will find is the thrill of what reality could be, that what completes him is far beyond the walls of his controlled life. Can he survive the betrayal that will befall him?

Fascinating, disturbing and simply amazing writing makes this tale a powerhouse read and a solid foundation for a new series that promises to entertain while rooting out injustice as an unlikely hero is born!

This author holds nothing back and the story unfolds, slowly at first but reaches cruising speed and never lets up! A highly recommended hidden gem in the treasure chest of reading!

I received a complimentary review copy from Daniel McMillan!