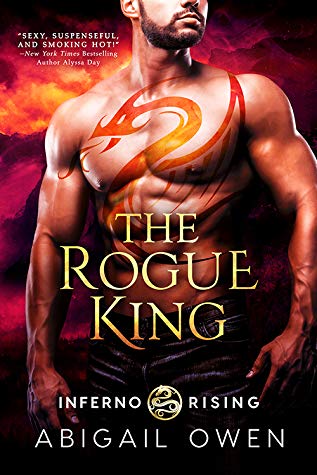 The Rogue King
by Abigail Owen

Kasia Amon is a master at hiding. Who—and what—she is makes her a mark for the entire supernatural world. Especially dragon shifters. To them, she’s treasure to be taken and claimed. A golden ticket to their highest throne. But she can’t stop bursting into flames, and there’s a sexy dragon shifter in town hunting for her...

As a rogue dragon, Brand Astarot has spent his life in the dark, shunned by his own kind, concealing his true identity. Only his dangerous reputation ensures his survival. Delivering a phoenix to the feared Blood King will bring him one step closer to the revenge he's waited centuries to take. No way is he letting the feisty beauty get away.

But when Kasia sparks a white-hot need in him that’s impossible to ignore, Brand begins to form a new plan: claim her for himself…and take back his birthright.

Her mother died so she may live free, but always on the run. Kasia is a Phoenix, a prize that brings great power and immortality to whomever finds and mates with her. She is also one of the greatest prizes a dragon king could ever possess and one hunter is hot on her tale, a rogue dragon with his own agenda and his own secrets.

Brand has a job to do, a mission to complete and his reward was once all he ever wanted, to belong to a dragon clan, something taken from him when his parents died. He never expected the fiery Kasia to be anything more than part of the deal, but his heart and his dragon beg to differ. Can he turn her over to a dragon king and walk away, knowing he will be one step closer to getting the revenge he seeks against the vile Blood King or should he go for the “gold” and claim her for himself, taking back his true birthright?

Can you say, hot, hot, hot? Imagine the chemistry between a dragon and a phoenix! If you thought of burning passion, you nailed it! THE ROGUE KING by Abigail Owen is filled with danger, adventure and the embers of a raging inferno about to ignite as one woman in hiding proves that even the hunter can be captured by the game!

Wonderful storytelling by Abigail Owen, fast and furious action, and that powerful thing called love! A strong start to a new paranormal series!

I received a complimentary ARC edition from Entangled Amara!