Whom Shall I Marry... An Earl or A Duke? by Laura A. Barnes (Tricking the Scoundrels, #2) 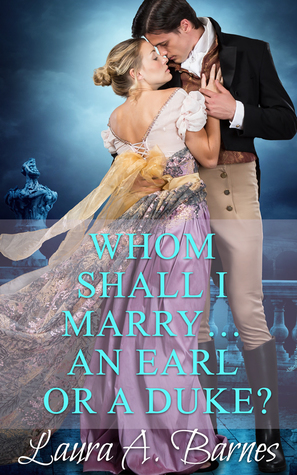 Whom Shall I Marry...
An Earl or A Duke?
by Laura A. Barnes

An afternoon spent in disguise leads to a passion that …

She wanted to explore the promise of his kiss. He wanted to persuade her to become his mistress. Will a case of mistaken identity lead to a marriage of love?

While trying to prevent her friend from a scandal Sophia Turlington becomes entangled in her own. As she waits for her friend in a brothel, a duke mistakes her for a harlot. When he requests an arrangement, Sophia decides to explore the passion he awakens in her soul. Her only stipulations for the affair are a mask, one week, and he must never discover her true identity. Can Sophia give him her heart and walk away as if their time never affected her?

Alexander Langley’s life as a prominent duke will soon come to an end unless he can acquire a duchess whose family can support him through a scandal. When he meets a violet-eyed temptress that awakens his every desire his search comes to a halt. As they explore their passion, he loses his heart to a woman he can never marry. Will Alex put aside his status in the ton for a love to last a lifetime?

Throughout the season Lady Sophia Turlington and Alexander Langley, the Duke of Sheffield’s dislike for one another is known to all. A chance encounter throws them together as Alex and ‘Violet’. After their time ends, Sophia wants Alex to see her for herself. If not, then she might as well accept her friend’s marriage proposal. Can Alex overcome Sophia’s deceit? Or will his need for revenge destroy the love she holds for him?

Whom Shall I Marry… An Earl or A Duke? is the second novel in Laura A. Barnes’s steamy historical romance series. If you enjoy a story filled with passion and secrets set in Regency England, then you must read Sophia and Alex’s journey toward love.

Whom Shall I Marry... An Earl or A Duke?
by Laura A. Barnes
(Tricking the Scoundrels, #2)

The ever-proper Lady Sophia Turlington and the ever-haughty rogue, the Duke of Sheffield, Alexander Langley may run in the same social circles, but their hackles rise with every meeting. When Sophia found herself hiding behind a mask at a house of ill repute in an effort to aid her best friend, a case of mistaken identity (thank goodness) finds her in the arms of the wicked duke as she enchants him with her charms and her with his experience.

Let the games begin! The Ton may never be the same if they were to find out one of their own has a hidden inner siren who ravages the heart of a known rake! WHOM SHALL I MARRY…AN EARL OR A DUKE by Laura A. Barnes is a deliciously devious romance that could bring two social enemies together, mind, body and soul! They say love and hate are equal emotions and while ignorance may be bliss, for the duke it is complete frustration for his heart!

Fun, sassy and filled with surprises, Laura A. Barnes has captured the spirit of romance and unleashed the hidden free spirit in a lady of otherwise high moral standing! I must say, I did enjoy watching the double standards practiced by the duke going up in flames of passionate glory that he never saw coming!

I received a complimentary ARC edition from Laura A. Barnes! This is my honest and voluntary review.

Email ThisBlogThis!Share to TwitterShare to FacebookShare to Pinterest
Labels: Laura A. Barnes