Castaways by Lily Harlem (The Challenge, #1) 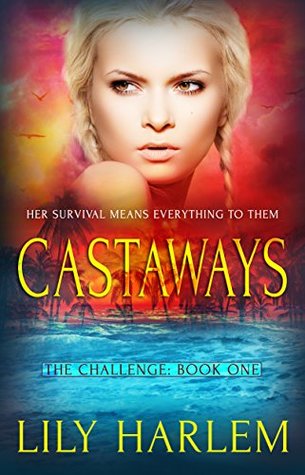 One girl. Five men. A deserted paradise island. What would you do?

Olivia Bailey is up for The Challenge. Why the heck wouldn’t she be? With mariner qualifications piled high, engineering experience to rival someone twice her age, she’s ready to take on the mighty Pacific Ocean and win.

But what about her fellow crew? Five guys, four nationalities. A billionaire’s heir who likes to take charge in every aspect of life, an outback expert with a heart-stopping smile, a Spanish chef with mouthwatering moves and sexy twins who reveal themselves slowly, until it matters, then they act fast.

An adventure was what Olivia wanted, it’s certainly what she gets. Because things at sea happen in a heartbeat, friendships grow, tempers heat and desire flares. But what about when it all upends? When the unexpected happens? Will they pull together, or will fear drag the crew of Temptress apart?

THE CHALLENGE, by award winning author Lily Harlem, is a reverse harem series best read in order and intended for mature readers.

Castaways by Lily Harlem (The Challenge, #1)

Olivia wanted an adventure, take on the Pacific Ocean as part of a sailing crew. As the lone female on a six member crew, she got a little more than she bargained, but she wasn’t complaining.

Lily Harlem’s CASTAWAYS starts out pretty good, and of course, we know where this is going, but she does NOT dump a puppy pile in our faces just yet. I like that aspect, let it build throughout the series and that twist at sea? Nice touch.

I think I wasn’t thrilled with the males all having a boys’ club meeting, deciding to share Olivia’s “favors.” No harm, no foul? Olivia is a hard-headed, strong woman, I liked her. I even liked the international boys’ club.

I just thought this was too predictable, nice, but not great. This IS a quick read that may be a good introduction to RH reads for many people. For me, it just needed a little more plot or something.

I received a complimentary copy from Lily Harlem. This is my honest and voluntary review.