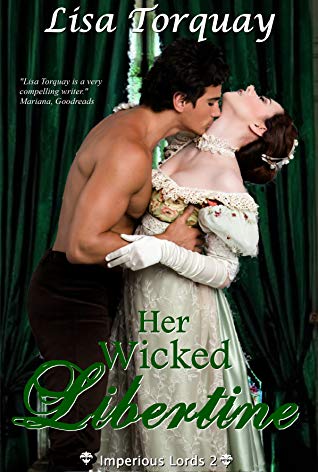 Her Wicked Libertine
by Lisa Torquay

When a prudish spinster…
Miss Edwina Whitman had a repressively religious education. For her, a woman must endure a gentleman's attentions. But when she sees herself face to face with a dark angel proposing the most wicked deal, she accepts it for her sister, who deserves a future. But the blasting libertine won't allow her to think of king and country in his presence. In fact, she forgets even her own name when he touches her.
Meets a shameless libertine…
Harris Darroch is no hero. Not a romantic one in any case. His libertine reputation puts his heroic prowess exclusively in the bedchamber. And he will bed any and every willing woman in sight. But when a prudish lady approaches him to beg the writing off her father's debt, he sees no reason not to enlist her buttoned up person to his bed for the trouble. Living in close quarters with her is building up a desire the likes of which he's never seen before. Though wanting him, the little shrew remains aloof. Practicing his 'convincing' skills on her will be an utter delight!
Love will lurk in the shadows to catch them!

Step one: Leave your blush at the door! Who knew the shameless libertine could bring out the wild side of the prudish spinster?

Step two: Keep the fire extinguisher handy! Lisa Torquay and Cupid are about to launch flaming arrows directly into the hearts of two people who seemingly have only one thing in common, a debt owed.

HER WICKED LIBERTINE is not only a passionate wildfire, it is a fabulously clever story of how one never knows when love will attack your heart with a fierce ferocity that goes beyond the physical! Moments of challenge, a strong-willed, if slightly misguided heroine willing to make a dramatic sacrifice for her family and an infamous rake who is more than his public reputation suggests make for a quick read that could end up with one or both of them changed forever.

Lisa Torquay tells a story of struggle, passion and heat that will keep readers turning pages quickly before they go up in flames!

I received a complimentary ARC edition from Lisa Torquay. This is my honest and voluntary review.