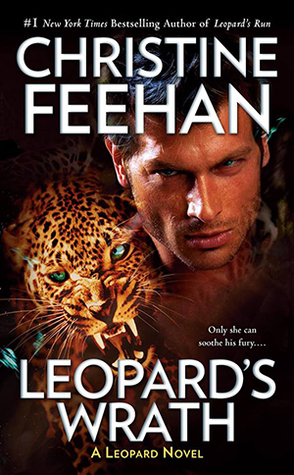 He’s a man used to getting what he wants, but she’s not the type of woman to take things lying down….

Born into a life of crime, Mitya Amurov has had a hard life, and his leopard has developed into a feral beast to protect him. It’s constantly trying to claw its way to the surface—until a chance encounter with a stranger instantly calms the predator inside him. While Mitya wants Ania desperately, it’s only a matter of time before his past catches up with him, and he’d rather die than put her in danger. But Ania is dealing with dangers of her own….

Considering her family’s history, Ania Dover should know better than to get mixed up with a criminal like Mitya, but she just can’t stay away. Something wild in her responds to his presence. A need so strong it scares her. But she’s not sure she can accept what he’s offering. Ania has always been an independent woman, and Mitya expects to be obeyed in all things.

Even with her body calling out for his, Ania won’t let anything stop her from settling a deadly score years in the making—not even the man who wants to claim her as his mate.

The queen of paranormal romance has done it again with a thrilling, steamy and laveously written addition to the Leopard People Series.

Mitya is an enforcer for his clan, harden, always fighting his beast side. He has accepted the fact that he will never find a mate, until he has a chance encounter with Ania, who soothes his beast. Mitya is scared that his leopard will destroy Ania.

Ania is out for revenge. But something deep inside her is calling out for Mitya. The demanding, dominant Mitya.

This is hot and steamy pairing where Feehan holds nothing back in describing Ania’s and Mitya’s developing relationship.

I’ve read all Feehan’s books and I have to say that she really knows how to bring the heat…in this case, quite literally. I have noticed that some of Feehan’s stories are very dark but this story is dark, but seems less dark than other novels in Feehan’s current lineup.

Exclusive Excerpt #2 (Chapter 2)
When Ashe was back behind the counter making coffee and selling pastries to the newcomers, Ania turned her attention to Mitya. “Why did you come today? What’s changed between when we first met and now?”
His palm slid down her arm, his thumb rubbing over the back of her hand. She knew if she had any sense of self-preservation, she would move it, but she couldn’t help herself. She wanted to feel his touch. She wanted the slow burn moving through her body. She’d never felt that way. The butterflies. The somersaults. The dampness like a slow-burning fire building between her legs. Her veins felt as if they were filled with hot molasses. Her skin felt electric. Her breasts were suddenly heavy. Hot. Even her nipples reacted, coming to two tight peaks. Aching. His touch did that. Just that thumb brushing over the back of her hand. She would be in such trouble with this man.
“I realized, looking at every single bit of footage we had of you coming into this shop, over and over, staying up at night watching it, that I am an even worse man than I knew myself to be because I don’t want to give you up.”
“We don’t know if we’re even compatible.”
“We know.”
She couldn’t deny that. She also couldn’t deny that he was a criminal. He wasn’t pretending to be anything else. He just put himself out there, all that raw sexuality, that dominant, commanding personality and thought she would deal. Could she? She had so much to lose. She knew she did, and the number one thing was her heart.
“You don’t even know my last name.”
“You would be surprised at what I know about you.” His eyes didn’t so much as blink, wholly focused on her, almost hypnotic.
“You don’t know the first thing about me and I don’t know the first thing about you.”
“You know we would burn together.”
She considered that. A night? Could she walk away from him after a night? Her heart clenched hard in her chest. It hurt. Just the way it would when she left him. She’d dreamt of a man like him. Reality and fantasy were two very different things. She’d seen Fyodor’s face when he’d carried Evangeline out of her bakery. He had the look of a man furious that his woman was anywhere but home. She wouldn’t be in the least surprised to read about a fire burning down the shop in the morning.
These were men in control of their lives and everything in it. She would have to live with the bodyguards, at least until the relationship burned itself out. She had her own life. Things she liked to do that she was fairly certain a man like Mitya would try to nix immediately. Things she needed to do she knew he would forbid. There would be fights. If he cared that much. If he didn’t, it would be worse than if they fought. Either way, she would be the one to lose. “You’re overthinking.”
“I’m an intelligent woman.” She gestured toward the bodyguards. “Are they always around you?”
He nodded. “They are necessary.”
“If we had a one-night fling . . .”
“One night will never be enough. A thousand nights will never be enough. If you come to me, Ania, it will be a commitment to me. To us. There will be no going back.”
“I sat in a car with you for fifteen minutes.”
He nodded. “You brought me something beyond any price. I thought to give you your life, but I find I’m not that man. So, I’m asking you to think about sharing your life with me.”
“Do you have any idea how unreasonable and insane that is?”
The unreasonable and insane part was that she was considering his ridiculous proposition even for a moment. She didn’t know him. She was a little afraid of him. Mitya Amurov was not the kind of man a woman could wrap around her little finger to get her way in all things. He was the kind of man who gave orders and expected them to be obeyed.