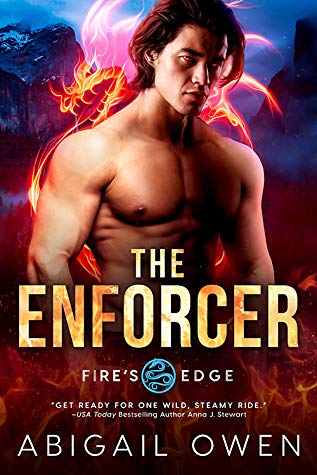 The Enforcer
by Abigail Owen

Death comes for everyone. Even Drake Chandali. The aging process that twists all unmated dragon shifters’ bodies into something useless has taken hold of his body centuries early. A mate could have reversed the process, but now it’s too late. To protect his team of enforcers, he leaves, and comes face to face with the woman he’d thought was human when he saved her from a fire months before.

Except she’s not human. She’s a mate.

Camilla Carrillo almost lost her family to wildfire. To discover she’s fated to mate a creature made of flame and rage, and become one herself, should be terrifying. But somehow a rightness settles inside her, especially when she’s around the glowering red dragon shifter who wants nothing to do with her.

When Drake learns Cami bears his mark — the same mark as the High King — he refuses to believe she’s meant to be his. It’s too late. How could he turn Cami only to take her with him to the grave? At the same time, he can’t walk away. Hiding her from the corrupt, rotting High King might be the last honorable thing Drake ever does with the little time he has left.

They hide among us, fiery dragon shifters with their slow ageing process, their soul deep loyalties to their clans and their desperate search for their fated mates, for to never find them will mean certain decline and death. Drake is coming to the end of his life, he has no hope of finding his mate, so he leaves his brothers behind only to come face to face with a woman he rescued months before from a raging fire. For all of the sexual tension between them, Drake knows Camilla is human, or is she?

Camilla bears the mark of a dragon mate, yet she doesn’t even believe dragons exist, could she be Drake’s savior or has his decline gone too far to even dream of finding what his heart and soul crave? To try to turn her now could mean certain death alongside him, besides, her mark is shared by both Drake and the High King…which makes her doubly dangerous or possibly doubly strong. Could this female possess the strength to pull Drake for the brink of death? Would she even accept him?

Drake is far from an open book, he is moody, standoffish and doing his best not to encourage Cami, but you know what they say about a hard-headed woman…Cami is fierce in her love of family, of those she cares about and in her loyalty to a man who she sees clearly needs someone on his side.

Abigail Owen’s THE ENFORCER sizzles with tension, not only between Cami and Drake, but among the dragons, as well. Brilliant storytelling in a world created to fall into and believe in, page after page. Feel the heat, the passions and the turmoil as one dragon and one mate find each other only after it may be too late.

An excellent addition to this series!

I received a complimentary ARC edition from Entangled Amara and Abigail Owen! This is my honest and voluntary review.