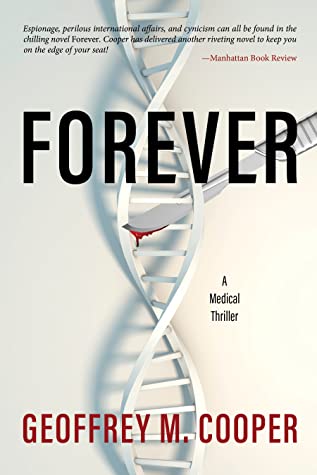 Professor Brad Parker is enjoying his sabbatical in one of Harvard's leading genomic engineering labs, focused on altering the human genome to meet challenges like treating cancer and increasing longevity. Then he's interrupted by a surprise request from the FBI. Can he help them track down a Chinese spy who's stealing the lab's secrets? Becoming engaged in a case of criminal conspiracy is the last thing Brad wants to do--but at the urging of Karen Richmond, his partner and now an FBI agent herself, he agrees. The ensuing hunt takes Brad and Karen down a trail of treachery and death that leads from Boston to the coast of southern Maine, where a killer lies in wait.

Medical thriller fans, Geoffrey M. Cooper has one for you! FOREVER combines scientific research, a professor who gets caught up in a criminal conspiracy when his genome engineering shows promise as a catalyst for treating cancer and possibly the scientific answer to the Fountain of Youth.

The last thing Professor Brad Parker pictured was being caught up in an investigation with his FBI girlfriend that would lead them down a deadly rabbit hole filled with deceit, treachery and murder when he is offered a grant that could answer his prayers to continue his studies.

Don’t expect over-the-top heroes, dashing and strong. Picture an academic who surprises even himself with what he is capable of doing when a colleague is suspected of being a spy and sending secret projects to an enemy/competitor. Something isn’t adding up when the possible spy commits suicide, could it have been murder? Why?

Geoffrey M. Cooper has nailed another intriguing thriller that will have readers turning page after page, following a labyrinth of clues that will not be untangled until the very end. Who knew laboratory science could be so exciting? Great writing, excellent characters, written in a fascinating way that is not far-fetched or written above a layman’s comprehension, not to mention a mystery that is simply fantastic!