The Damned Society: Smoke and Mirrors by L. J. Elliott Blitz and #Giveaway 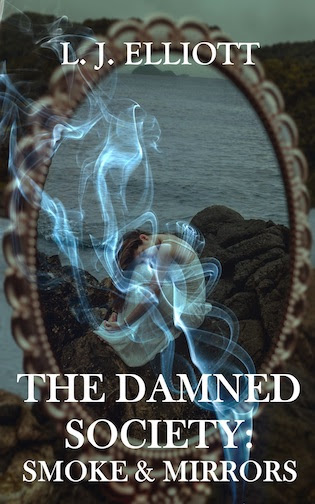 Lexia Luccen is a seventeen-year-old girl with a fiery power that is slowly destroying the last fragments of her sanity. Having lost her abusive father, Lexia is left scarred from the way he treated her and by the grief of his death. When she accidentally uses her ability to create a devastating explosion that takes many lives, she is moved from her life of solitude into the hectic youth facility that is Lucida.

Lucida is no ordinary youth facility. It is a secretly run technological agency for supernatural wayward youth, set up to teach them how to control their abilities after they have caused disturbances in society. These youths think that once they have been reformed, they will be freed. However, the truth is a very different story.

Lies, love, and more death await Lexia at Lucida, and she soon realizes that this facility is not quite what it seems. Now she knows she must make a choice: does she finally give up to the darkness that slowly consumes her—like her father did—or does she follow the firestorm that runs through her veins and for once in her life, battle for something?

Time is running out. Lexia needs to make her decision fast, before Lucida makes it for her.

The smoke built around me with speed, carrying a taste of destruction as it vaped through my senses. The air gushed past my skin, getting heavier in pace with each breath I took. The smell of burnt paper lingering as it flowed around in the destructive zone that I was creating. I had never lost control like this before, yet at the same time, had never felt so happy about it. My mind was not instantly filled with regret or sadness at the fact I had let my power control me. In fact, it was quite the opposite. I was glad because it was the thing that ultimately helped me out in the end. For once, we had partnered up and were working together. I had never felt such strength from it before. It didn’t hurt, it just felt like it was a part of me now and like my power had momentarily become one with my soul. I closed my eyes and let the solidarity marinate in every moment we bonded together as I knew the feeling would not last forever and so, as I clenched my fists and the energy poured out of my body, for once in my life, I had no regret about harming something or about letting go of control. My mind and soul were finally free.

“Here we go again.” The words flew out of my mouth effortlessly as I heard my bedroom door crash open. My aunt entering the space with another look of determination to get me out of bed, crinkling her aged face. It was another episode of, Do What I Think Is Best For My Niece, Even If It Is Not. I threw my blanket over my head just as the morning sunlight bathed my room with a pool of golden radiance as my Aunt Sylvia stormed her way in and drew back the curtains almost viciously. Something she had begun doing every morning this past week to try and finally get me out of my selfcreated blanket cocoon. Instead of being happy another morning had dawned upon me, I dreaded entering the real world. As the golden shimmer poured through the cracks of my blanket, I wanted to hide further under my white cotton shield and just dissolve away into my mattress. “Aunt, get out. I want to sleep,” I grumbled from under the covers, even though I had a feeling it was going to be a waste of words today. I had pulled this trick too many times already. The game that was hiding away from my problems. “Come on,” Sylvia groaned back in her familiar stressed tone as I heard her feet shuffle across the wooden flooring and stop beside my bed. I dug further under as she suddenly tried to tug away my blanket and the sunlight spilled in even brighter around the space, projecting her shadow onto the floor with its illumination as my eyes started to peek through the cracks. “You are going to college today whether you like it or not. Now come on, you can’t afford to miss another day.” Silence lingered for a few moments before I felt a hand latch around the fabric above my head. The Damned Society 12 “Lexia, you are seventeen, not seven. I’m not playing this game anymore.” She tugged at the blanket edges even harder to try and snatch it away and after a few more annoying moments of fighting to stay hidden, she sadly succeeded and my barrier flew to the ground. I hissed like a vampire as the brightness that surrounded the room hit my eyes. I sure felt like one of late, seeing as neither my skin nor my eyes had seen the light of day since I had locked myself in my room for so long. Three weeks now and counting. The only times during that period that I did leave was when Sylvia left for work, after giving up on trying to get me out of bed. I would scuttle to the bathroom and then the kitchen to stock up on some food, with my blanket wrapped around me, continuing to be the shield that repelled away my reality. And it had been working—I wasn’t thinking of anything. However, given how oddly stern she seemed this morning compared to other attempts this week, I really did have a feeling my time of hiding from reality was up. 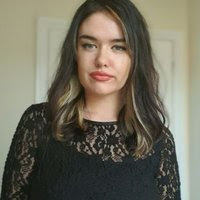 Lotté Jean Elliott is an author from North-Eastern England. She began as an avid reader before she picked up a pen one day and started to use her imagination to create a new universe, just like her favourite fictional ones.

Through literature, she saw a whole new world open up, and she has not stopped diving into the deepest parts of her mind ever since.

When she isn't writing novels, poetry, or screenplays with her sister Francesca, Lotté loves nothing more than to find inspiration for life through art films, music, exploring museums, and language learning. She loves to explore the deepest meaning behind things and gain new perspectives of the world in which we inhabit.