The Beyond by Eliza Green (The Breeder Files, #4) 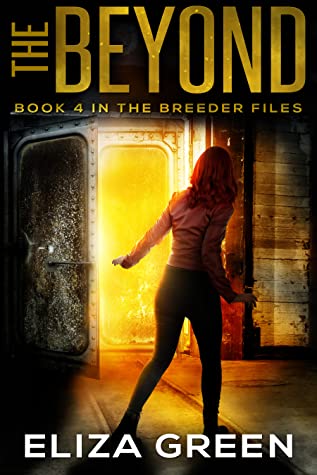 She wanted freedom. It could cost her everything.

Following a battle with the machines, Anya Macklin is left shaken. She and the rebels retreat to their haven, but a new emergency jolts them out of their short-lasting peace. One of the rebels needs medical attention fast. And the machine city is the only place that can save her.

The battle-wearied rebels return to the city for the biggest fight of their lives. But the discovery of the Beyond in the last place they expect shocks them all.

As Anya reaches the place known only to a few, the harsh realities of her new haven quickly set in. The Beyond feels familiar but Anya doesn’t remember it. Now the keepers are telling her lies and she doesn’t know why.

To save her friends and her sanity, Anya must abandon all doubts and fight for the only life she’s ever known.

The Beyond by Eliza Green (The Breeder Files, #4)

Throughout this incredible series, throughout the conflict, the differences, the fears and the hate that has grown between the races, Eliza Green never ceases to amaze me how she weaves in threads of acceptance, loyalty and caring! Part science fiction, part dystopian, and 100% creative and entertaining, THE BEYOND has a little of everything in perfect measure.

Once again, Eliza Green gives life to each of her characters, gives them incredibly hard decisions, great sacrifices, miracles and seemingly insurmountable odds in their quest for a place that could either be their personal Utopia or a living nightmare. Is the Beyond even real or another trap created by the Collective?

Secrets are revealed and the ultimate trusts are tested as the band of rebels must go into the belly of the beast to seek salvation.

I am a huge fan of Eliza Green’s writing, her creativity is astounding and her ability to make the impossible seem real while keeping up a steady and rapid-fire pace is nothing short of phenomenal! If you are looking for somewhere to escape into, this is the place.

I received a complimentary ARC edition from Eliza Green! This is my honest and voluntary review.