Shelter for the Damned by Mike Thorn 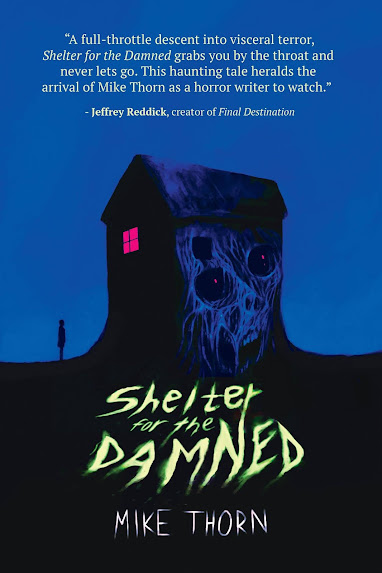 While looking for a secret place to smoke cigarettes with his two best friends, troubled teenager Mark discovers a mysterious shack in a suburban field. Alienated from his parents and peers, Mark finds within the shack an escape greater than anything he has ever experienced.
But it isn't long before the place begins revealing its strange, powerful sentience. And it wants something in exchange for the shelter it provides.
Shelter for the Damned is not only a scary, fast-paced horror novel, but also an unflinching study of suburban violence, masculine conditioning, and adolescent rage.

Shelter for the Damned by Mike Thorn
As if adolescence wasn’t tough enough, a teen boy discovers an otherworldly shack that seems to bring out all of the growing pains, weaknesses and monsters that Mark will face in his journey between childhood and adulthood. Will this secret hideaway be his downfall, his journey into an unspeakable hell or something else?

SHELTER FOR THE DAMNED by Mike Thorn is dark horror at its most intriguing as readers can simply read for the thrill of the darkness or interpret events in a much deeper way. Either way, this story is riveting from start to finish as an emotionally lost teen discovers an escape within the walls of a hidden shack that will forever change his path.

Chilling, filled with suspense, teen weaknesses, that feeling of “otherness” and knowing that something terrifying is just out of sight, but it is coming.

Great writing, filled with atmosphere, this tale is one to definitely not miss. Mike Thorn has the talent to put together all of the jagged pieces and create a collage of darkness one surely won’t forget soon.

I received a complimentary ARC edition from Mike Thorn! This is my honest and voluntary review.