Songs of Insurrection by J.C. Kang (The Dragon Songs Saga, #1) 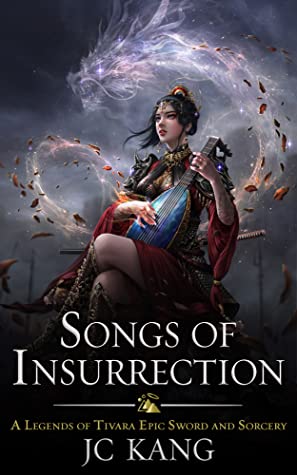 Only the lost magic of Dragon Songs can save the world. Only an awkward girl with the perfect voice can rediscover it.

The Dragon Singers of old summoned typhoons and routed armies, liberating mankind from the orcs before fading into legend. Now, with the world again facing a new cataclysm, the power of music stirs in Kaiya, a naïve misfit with the perfect voice.

Without a master to guide her, she must rely on Hardeep, a disgraced foreign paladin, to help awaken her latent magic. His motives might not be entirely noble. When he leads her to the fabled Dragon Scale Lute, which only a Dragon Singer can wield, it is up to Black Lotus Clan to intervene.

Because the instrument’s fell power can save the world…

Songs of Insurrection by J.C. Kang

This is my second reading of J.C. Kang’s SONGS OF INSURRECTION. This time out the author has added more depth, cleaned up loose ends and given us characters that literally step off the pages. From the young princess with a special gift to the young prince she loves, to the mysterious Jie and Tian, a boy long ago banished from the court, the intrigue of their stories come to life with an edgy grace.

Political machinations are brewing, war could be on the horizon, yet, these four could play a pivotal role in defusing the tension with magic. Can one of them make the Dragon Scale Lute sing? The magic from song may be all that saves their world.

J.C. Kang melds the beauty and grace of Asian fantasy with the edginess of the Western world into a tale that feels deep, mysterious and fascinating.

Sometimes an author should leave their work alone, but sometimes just a little tweaking here and there create a tale becomes even more outstanding.

I received a complimentary ARC/updated edition from J.C. Kang & Dragonstone Press! This is my honest and voluntary review.