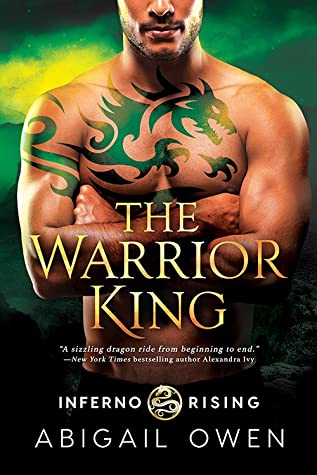 Meira Amon is the most reserved of the phoenixes, finding computers easier to deal with than people and their messy emotions. But she wants revenge against the Rotting King Pytheios for the murder of her parents just as much as her sisters. Offering herself as a queen for their ally, dragon shifter King Gorgon of the Black Clan, only makes sense.

Samael Veles worked his lowborn ass off to become the fiercest warrior of the Black Clan. He has pledged his life to protect his king at all costs. Yet somehow, in the middle of war, he took one look at a woman in a reflection and gave up his heart. When that woman turns out to be the phoenix promised to mate his king and help bring peace to their kind, he has no choice but to accept it.

Until her fire unexpectedly destroys the king after they’ve wed. Now Samael must choose between his loyalty to his clan and protecting the queen who might be his mate from his people’s wrath, one of which will unlock a destiny no one could have ever imagined…

Talk about meant to be and caught between a rock and a hard place. Abigail Owen’s THE WARRIOR KING combines a sweet, slow-burn romance and the edgy, fast and furious battles of dragon against dragon.

Meira has offered herself to the king of the Black Clan. Not only has she found herself an honorable leader, but the perfect opportunity to avenge her parents’ deaths.

Samael is the fiercest warrior in the Black Clan, his loyalty to his king has never been questioned, but from the first time he saw the beautiful phoenix, Meira, his dragon was determined to make her his mate and the flames of destiny are burning. Disaster strikes and now he must keep the young Queen safe, but safe form an enemy or safe from his own feelings?

Abigail Owen has balanced romance, passion and the suspense of impending battle with the precision of a surgeon. Brilliantly told, non-stop and magnetic, the pace flows perfectly and the romance is sweet!

I received a complimentary ARC edition through the author and Entangled Publishing! This is my honest and voluntary review.