Beneath the Destiny Stone by Sarah Charles Blitz and #Giveaway 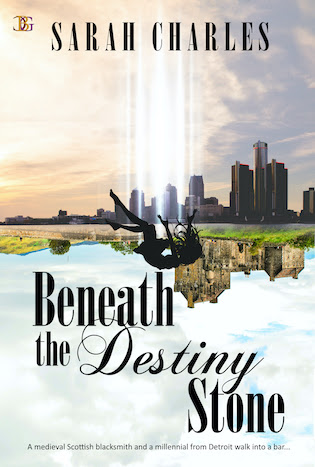 By the age of six, Fiona could sink a bank shot.

By eight she could mix a perfect Manhattan.

By twenty-two, she had a business degree and a concrete plan to save her grandfather’s failing bar.

Then she was pushed through a time-portal.

Now Fiona is stuck in fourteenth-century Scotland with no way home. There’s a good chance time-soldiers are after her. And Henry, the guy she’s shacked up with, is a grumpy son-of-a-bitch who doesn’t get her at all.

He is hot, though.

And most definitely the love of her life.

If the two of them can stop bickering long enough, Fiona just might be able to have it all—the tavern of her dreams and the first man who can actually keep up with her. That is, if they can survive the battles, murder, and mayhem of the Middle Ages and the time-soldiers who have a hand in it all.

My granda once met the devil himself.

At least, that was the story he was telling his friends. They sat at their usual corner table of the Caledonia Club—Old John, William, Robert, and Granda. Above them, an olive-green lamp illuminated a haze of cigar smoke and dust motes. A Scottish flag hung behind their heads, and on a pedestal in the corner sat a bust of Robert Burns, there to remind them what becomes of the best laid schemes o’ mice an’ men.

His voice carried across the club to my spot behind the bar, and I smiled to myself. Of all Granda’s stories, I loved this one most.

“There I was, storming the shores of Normandy, gunfire blazing on all sides.” He paused for dramatic effect. “But it wasna the bullets I feared. Nay. It was the man standing before me with fire in his eyes.” He stared each of his friends in the eye. “Auld Clootie.”

Jones, the Caledonia Club’s shift manager and sometimes cook, laughed beside me as he counted out cash for the till. “What the fuck is a clootie?”

I gave the bar a final wipe and tossed the rag into sanitizing solution. “It’s a Scottish thing. They don’t like to say devil, so they’ve got a bunch of nicknames for him.”

Jones smirked. “You sure they’re not talking about their Depends? I bet John’s wearing an old clootie right now.”

I laughed despite myself. “Don’t start. It’s already bad enough I have to deal with that lot.”

As if to punctuate my point, William knocked over his drink, and the rest of the table hooted and hollered.

Jones jotted down the register balance in an old-fashioned paper ledger and bumped the drawer closed with his hip. He raised an eyebrow. “You sure you want to do this now?”

I glanced at the old men and sighed. “Better now than after they’ve cashed that bottle of Glen Livet.”

He put a hand to my shoulder. “I have complete and utter faith in you. You’ve got this!” He yanked his phone from his pocket. “Now if you’ll excuse me, I’m just going to check out some job sites for completely unrelated reasons…”

I flicked him in the forehead and snickered. “Dick.” He handed me the ledger, and I headed from the bar to join the old men.

“…so, I shot off his horns and shamed him back to hell,” Granda finished with a grin. The old men laughed and nodded in approval.

“It takes bigger stones than Auld Clootie’s to take on a Highlander,” said Old John.

I pulled a chair from a neighboring table and squeezed in next to Granda. He flashed me a wide grin. “Ah, Fiona, love. I was just tellin’ the lads about the time—”

I gave him a quick peck on the forehead. “I heard you, Granda.”

He patted my cheek. “Such a bonnie lass.” He beamed at his friends. “Isna my granddaughter the bonniest lass ye’ve ever seen?”

I rolled my eyes. Sure, I looked exactly like Audrey Hepburn, except for my face full of freckles and head full of curls. I supposed we were both brunettes, though, so there was that.

I grimaced at John’s words snatched the bottle from his hand. “What did I tell you?”

His brows crinkled. “What? I just said—”

I glared down the bridge of my nose at him. “Do I have to call your wife and make her come get your old homophobic ass?”

Jones sauntered to the table with a fresh bottle. “It’s all right. We all know why he likes to suck on them cigars all day.” He winked at Old John and set the bottle in front of him.

Everybody burst out laughing, except for Old John who flushed purple. I slid the ledger in front of Granda.

He held it at arm’s length and squinted at the numbers. “What am I lookin’ at?”

I gnawed on my cheek. “We didn’t break even this month.”

He gave a half-hearted shrug. “Aye, well…business’ll pick up.”

I took a deep breath. “No, it won’t. We have three customers, and they’re all at this table.”

William lit a cigar. “Aye, but Robert drinks as much as five men.”

“Used to say the same o’ your mum,” Robert shot back, and the old men cackled.

I looked Granda in the eye. “We need to bring in a younger crowd.”

“How should we do that? Turn the place into a disco?” Granda gestured around the empty bar. “Bring in a few go-go dancers?” The old men laughed.

I narrowed my eyes. “Be serious.” 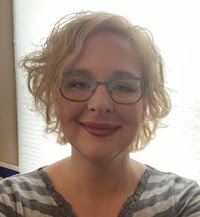 Sarah Charles is the author of Beneath the Destiny Stone, a book she wrote to keep from going insane while recovering from a spinal injury. (It mostly worked). A long time ago, in a galaxy far far away, Sarah graduated suma cum laude with degrees in Psychology and German. Since then, she’s worked in the mental health field, owned a custom cake business, and given birth to three future super villains. She currently spends her days writing and working to bring food forests to Toledo through her charity The Three Penny Project. In her rare moments of free-time, Sarah dabbles in all things craftsy. She particularly enjoys wood-burning, rehabilitating old furniture, gardening, baking, and playing with clay.